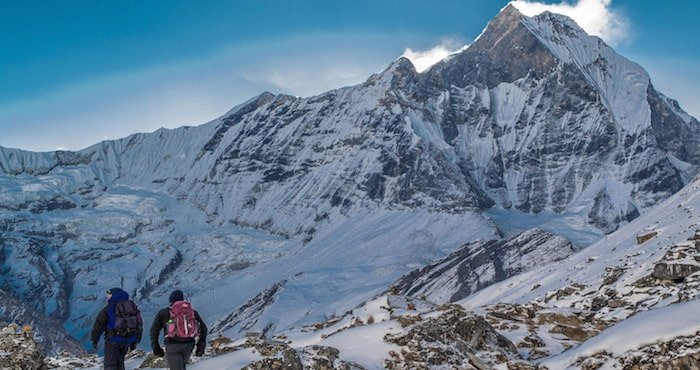 From October through to December, Lost Earth Adventures ran seven expeditions across Nepal.

Highlights were plentiful and memories were created to last a lifetime; from reaching high-mountain passes, rafting of the Himalaya’s finest rapids, camping under the light of a million stars, trekking through ancient kingdoms and mountain biking down deep gorges. Along the way we were lucky enough to spot an elusive black leopard, were invited into stay in a monastery by its Head Lama, and trek into an extremely remote area far beyond the beaten path.

The trips were in great company with clients joining us from across the UK, Europe, North and South America. Thank you to everyone that came out to Nepal with us. Here’s our season in review!

Rafting the Bhote Kosi and Kayaking the River of Gold 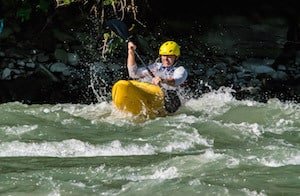 Kicking off the season, guide Richard Goodey was leading a 23-day private expedition with the affable and exciting couple, Heather and Steve. Both were extremely fun and likeminded, keen for an adventure!

Day one saw them kayaking grade 2 rapids of the Sun Kosi (River of Gold), often regarded as one the top ten river journeys in the world. The next morning they were rafting the fierce grade 4+ white water of the Bhote Kosi. With expert guide Manish Sunuwar commanding the craft they ran some newly created high volume, gurgling rapids that were formed by landslides during the last monsoon.

Read more about kayaking and rafting in Nepal

Hanging up their paddles, rucksacks were packed and the group set off in a Landcruiser to the village of Jagat. Next on the agenda was an epic adventure, trekking and mountain biking around the colossal Annapurna Circuit. 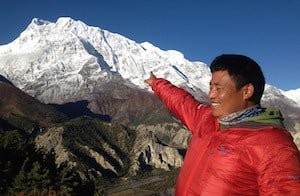 Heather, Steve and Richard trekked the western side of the Annapurna’s for the next nine days, across the world’s biggest terrain, with constantly changing vistas eventually bringing them to the summit of the 5416 meter high Thorong La pass… this is where the action starts!

Our bike guide Jevi delivered the mountain bikes (full suspension, Giant Trance X3’s), bringing them up from the eastern side of the pass. The next few days would cover 3000m of descent and is the perfect way to finish off the western side (and downhill portion of the circuit). This is three solid days of off road biking, covering 100km through the world’s deepest gorge! 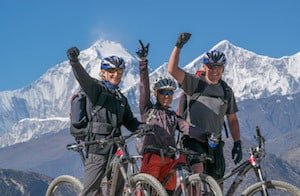 The Annapurna Circuit has oft been recommended by many adventure writers and publications as one of the world’s best walks, where every corner is a treat to the senses. Astonishing panoramas and high mountain culture gives this a truly jaw dropping experience – even better with a mountain bike!

If you’d like more information about this epic adventure visit our Annapurna Hike and Bike page.

You can also read Heather’s review on Trip Advisor 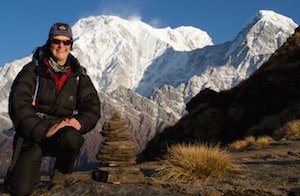 While Richard was circumnavigating the Annapurna’s, Lost Earth Adventures’ guides Nick Read and Dipak Bhatta were having just as much fun, leading a group on our Annapurna Sanctuary and Mardi Himal Trek.

This is an all-around superb trekking itinerary that brings you into the heart of the Annapurna’s and along the remote ridge to Mardi Himal Basecamp. The group faced some heavy rain showers but were rewarded with spectacular views spanning across the Himalaya.

Continue reading about the Annapurna Sanctuary 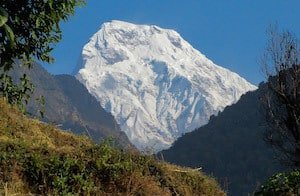 The fantastic and highly acclaimed Krishna Laminchaine was guiding Martin on a private trip to Poon Hill. They too attempted to walk into the Annapurna Sanctuary but were thwarted by heavy snowfall, which created an avalanche danger. The weather this October was highly unusual for the time of the year. Krishna sensibly diveretd the route to lower ground. One of the highlights of this region is the vast network of footpaths that can be found, meaning there’s always diverse and interesting trekking routes to be found. 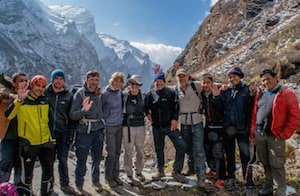 Unusual weather patterns interupted plans for the next tour to Nar and Phu – heavy snowfall on the 5200m Kang La meant meant crossing the pass would not be possible. There was a longterm low pressure system looming over the Himalaya. With this in mind, Richard diverted the group to Mardi Himal Basecamp and then on to Annapurna Sanctuary.

Mardi Himal is a remote and rarely visited region and is a haven for rare species and wildlife. Between the team they spotted a black leopard, vultures and a Himlayan pika.

The Mardi Himal Base Camp trek climbs a high ridge to a rustic lodge called High Camp at 3700m. Settling in with dozens of hot drinks and plenty of food the group had an early start the next morning. Matt and his dad, Steve set off with guide Bhairas at 4:00am for a moonlit scramble to 4500m for some of the best views in the Himalaya, including most of the Annapurna range and Machapuchare. Guide Richard, Barbara and Claire climbed another peak where Barbara decided that rather than walk on the path she’d prefer to scramble on the steep hill sides through long grass. Richard said to Binod, one of our porters, “she looks like a mountain lion.” Binod pointed, then started shouting, “mountain lion, mountain lion!” Richard laughed, thinking Binod was agreeing with him, until he realised that in-fact a mountain lion was bounding down the hill and across the ridge. A black leopard, the size of a greyhound had been disturbed by Barbara, our very own mountain lion, that was more at home in this habitat than that fury feline.

Read Barbara’s review on her blog. 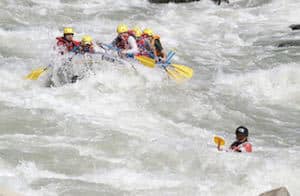 Nick was on another mission; two weeks of never-ending adrenaline filled adventure leading our signature offering – Nepal Xtreme. Crossing the Himalaya on kayaks, rafts, through canyons on ropes, mountain bikes, paragliders, jeeps, light aircraft and also for Bret a day was spent exploring the Himalayan foothills on a Royal Enfield motorcycle. Never a dull moment! 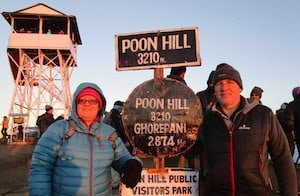 Tailor Made Across the Himalaya

Krishna then had the pleasure of leading David and Katie on a tailor made trekking and sightseeing tour, showing off some of the best sites of his beautiful country. In just ten days they visited the lofty hill top retreat of Bandipur, enjoyed a four day trek to Poon Hill, sunrise views from Nagarkot and explored Kathmandu and the ancient city of Bhaktapur.

Read David’s review of the trip 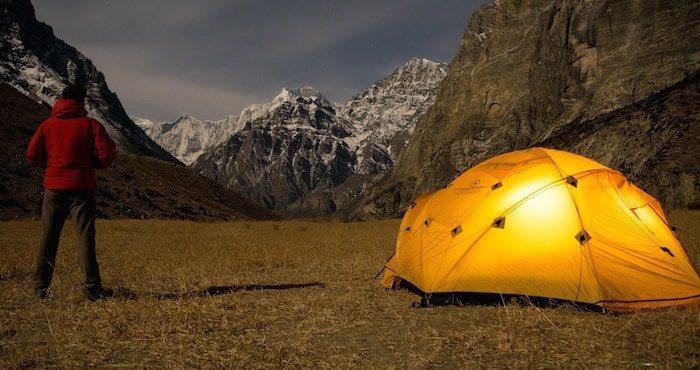 The weather charts showed a solid block of high pressure for the next ten days so Richard, on the last trek of the season, ventured into the ancient village of Nar and the Phu Valley. Giddy with excitement, this was the first time leading the trek for Richard, whom was joining good friend and guide, Bhairas Tamang on the trail. Bhairas had recced the route for us the year before. 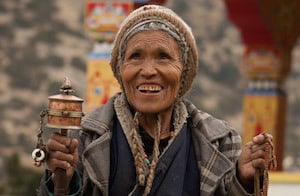 This trek is about as far off the beaten path as you can go. If you want big mountain terrain, no tourists, some serious dosages of remoteness paired with un-touched Himalayan culture and you don’t mind challenging and tough trails then this is the trek for you.

There are villages dotted around this region where food and lodging can be secured but they are too far apart to comfortably walk between each day so tents are needed.

During the week spent in this region the group passed only four other trekkers. Camping at 4000m on a grassy plateau with front row seats overlooking the 7937 meter high Annapurna 2 and the 6983m Lamjung Himal we sat round a campfire while chef Kumar served us a 3-course meal with cheese and biscuits to finish, watching the moon rise over the Annapurna’s.

Descending to Nar they spent a couple of nights at a monestary with the Head Lama and his elderly lady assistant. Time was spent relaxing and reading books whilst the monk and his assistant prepared an endless stream of food and drinks. 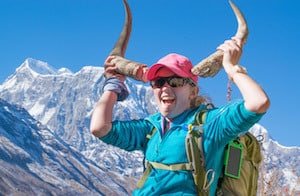 The monastery is set high above a deep rocky gorge and totally surrounded by 6000m peaks, the people living in harmony with the many animals. Fresh milk came from the monk’s pet cow after giving a blessing and good luck for the next part of the journey.

On our way back to civilisation the group donated all of the uneaten food to a poor family who’d touched them on the way up. Whilst drinking tea with them it was noted their daughter was severely underweight. We’re not sure what they thought of the very un-Nepalese chocolate brownies and custard but they started tucking into the biscuits without delay. 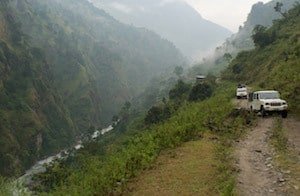 Back to Jagat and the group was met by our jeep driver, Mahendra. He is the best 4×4 driver we’ve met in Nepal and is seriously in-tune with his vehicle, in this case a rugged Indian made Mahindra Bolero. On all our trips in this region he is our man. The ‘road’ from Jagat to Besisihar is 3 hours of some of the most spectacular driving the Himalaya has to offer and having a driver and vehicle you can trust makes this journey truly enjoyable!

Read more about this trek to Nar Phu

Update for 2016 and Current Conditions

The April 2015 earthquakes affected both trekking regions and we took the decision to suspend treks to these areas for the autumn 2015 season. Thankfully we can report that both areas are possible and open for 2016.

The circuit is fully open, with the trails and teahouses throughout the route in good condition. Over the past few months, groups of trekkers have completed the circuit and a dedicated team have been restoring the trails to optimal conditions. We’re looking forward to trekking around Manaslu throughout 2016.

Trekking in the Langtang Valley is possible however there have been some amendments to the itineraries, due to rerouting of some of the paths.

Trekkers must enter via Sherpa Goan and a stop at Langang Village is no longer possible however there are tea houses available close by in other villages. Tserko and Kianjin Ri are still possible as are trips out to Yak Kharka.

Pairo and Lama Hotel are not possible this year due to extensive damages but lodging is available in close by Rimche. lodges are being restored in Lama Hotel and should be finished by April 2016. Thulo Syapfru has tea houses operating and is ready to accept trekkers.

Dhunche, Gosainkunda and Helambu is now possible with lodges opperating in all villages and trails repaired.