Byron is one of our guides to Nepal and is at home in any mountain range. When he sent Lost Earth Adventures this picture of him, we just had to know the story behind it and asked Byron to tell us all about it. 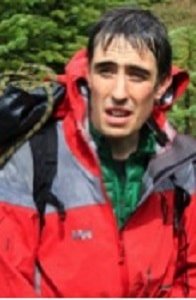 Here’s his account of climbing Mt. Forbes, at 3612m high, it is Banff National Park’s highest mountain and one of Canada’s most remote peaks.

FYI: Now before I begin, I would just like to mention that I’ve never written a blog before and until I was asked to write about this, it had never occurred to me to do one. After reading several examples on the web, I realised some were great, some were just ok, and some… were just not worth the time to read! I’d like to think, hopefully that my account falls into the first category!

An idea starts to take shape! 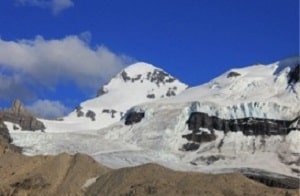 Last July, after weeks of working too hard, saving money for a trip to Europe and an impending move to New Zealand I finally got 2 days off in a row. So the question begs, what to do when you have 2 consecutive days off in the Canadian Rockies? Run to the hills and try to get to the top of something!

A buddy of mine, Keil and his girlfriend, Nicky had the same time off and asked me to join them, along with their mate Trevor on a mission to Mt. Forbes, the 8th highest peak in the Canadian Rockies and remote – very remote!

I was hesitant at first as I was working a lot over the summer and hadn’t got the chance to hit the high peaks as much as I wanted to, nor was I in the best shape. To just get to the bivi (wild campsite) was a 24km (15 mile) slog through unmaintained, wild terrain – but hey, you don’t get fit by just sitting on the couch and you can’t pass up the opportunity to climb the highest peak in Banff National Park, now can you!

We were to drive out early in the morning, hike the 24km to the bivi site, sleep for a few short hours, wake up for an alpine start (3am), summit and get back to the car so we could get back to work the next day.

The forecast was not great, but it said that it would clear overnight, stay clear the next morning for us to summit and the weather would not turn until the afternoon when we would hope to be off the mountain and on the trail home. All in all we thought we had a good chance at the summit. But, like a lot of remote alpine adventures in the Rockies we knew there was a fair chance that this adventure could end up being little more than a “hike in, hike out” operation, carrying a lot of unnecessary gear – but we were fine with this proposition.

The plan sounded great in theory, but in practice, it turned out to be a bit painful!

And so, the adventure begins…

The first section of the approach was fantastic, we powered through the first 9km to Glacier Lake on a great trail with 210m of elevation gain. The unfortunate part is you descend 220m to get to the lake with a net loss of 10m. 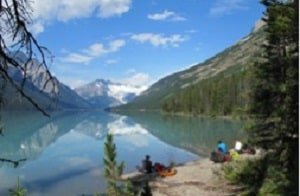 Instead of bringing a pair of trainers and my alpine boots I decided to bring my Keen sandals to save some weight. My reasoning was walking the full 24km (almost 50km round trip) in my alpine boots would kill my feet. It seemed like a waste of space and weight to bring a pair of trainers. So I did the 9km to Glacier Lake in my Keen sandals and switched to my boots there.

In hindsight it would have been better to bring a pair of trainers because I could of worn them all the way to the end of the flat bit of the hike, which would have made the bush whacking a bit more enjoyable (but still quite painful)!

From there the bush whacking begins (about 10km) to where we had to ford the Glacier River. Over the first 4.5 kilometres to the end of Glacier Lake the trail got progressively worse, (along with the weather – though it looks good in the picture, the nasty weather started to roll in shortly after the it was taken) on an old unmaintained trail. On the last 5km there is not much of a trail at all.

Crossing streams, climbing over fallen trees along with all the wonderful things that help you build good character. The weather started to turn on us in this section with a few showers, and overcast skies. We decided to push on because the forecast said it was to clear up overnight and the sun still managed to poke its head out from time to time. In this section we had a run in with a hornet’s nest! You need to be careful because those crafty b****ers build their nests anywhere and are easy to step on. Keil and Nicky both got stung, but it would take a bit more than a hornet’s sting to stop them. They’re tough as nails! The funniest part is Keil screamed like a girl and his girlfriend, not a peep.

Now is where the real fun begins! 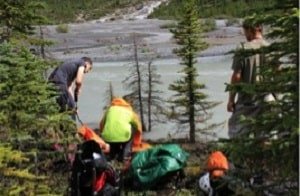 Next we had to cross the glacier river. Strapped to my back was a trusty Explorer 200 (a lightweight inflatable expedition raft). The ford across the Glacier river generally can be done easily by just simply walking across knee to waste deep water, but this summer Banff got heaps of rain and water levels were a lot higher the normal. So we thought we might need a little help from a friend, and help us it did! 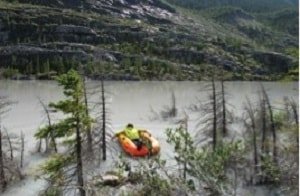 The river would have been up to our chests and it was moving fast at the time we were there. Keil used his master paddling skills (hand paddling as we had no real paddles) to bring the raft across the first time. From there we set up a line and just hulled it back and forth with gear and people. I was a bit sceptical of the plan when we were making it but it worked out great and got us all across safely and somewhat dry.

After the river crossing the journey continued 4 kilometres left with over 1000m of elevation… yeah the easy part was definitely over! We continued up the Mons Glacier drainage through some interesting terrain and yes, even more bushwhacking. 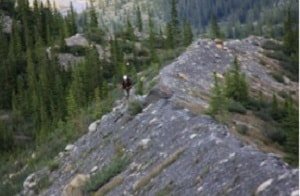 We pushed up to an old over gown moraine, the only remnants of the Mons Glacier, that hundreds of years ago touched all the way to the valley floor. Once we climbed to the top of the moraine we followed it to the end where we met a section of fun, but steep class 4 climbing (Grade 3 scrambling – Moderate climbing in UK terms). 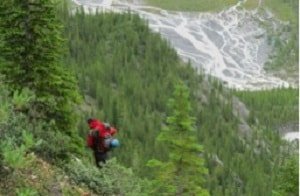 It was at this point near the top of the steep head wall that Trevor and I thought it was time to throw in the towel. Rain was coming down on us and the rock was getting slippery, steep and it was getting quite late. Unfortunately the ambitious nature of our ascent was our downfall in the end – too far and not enough time. Nicky and Keil decided to continue a bit further while we descended down the steep section to set up camp near the moraine.

After a great meal of boil-in-a-bag pasta, a hot drink and some talk of how we can do it better next time we were off to bed for a great sleep. 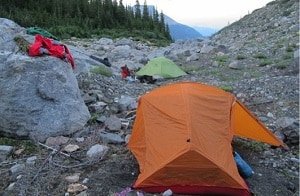 The next morning when we awoke I think Mr. Forbes thought it would be a bit funny to rub it in our face with some short-lived clear skies. We were lucky to have enough time to smash back some breakfast, pack up and start making our way back down. It was not until we were half way down the moraine that the rain started again. 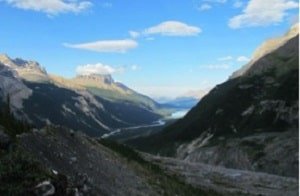 Once we got back to the bottom of the drainage we had to cross the river once more this time it was my turn to make the first paddle and set up the line. The water was still cold but we made it across and then it was a nice, short 20km back to the car.

So back to the photo!

Some time on the way home is when it was taken, I can’t quite remember when but it was at some point when I was feeling the pain. It shows how the trip was. It was tough, long, wet, and miserable at some times but all in all, it was a great time. Like I said at the start of this post, a lot of alpine missions in the hills end up being a hike with a lot of unnecessary gear because the weather goes bad or in our case we were a bit too ambitious with our plan.

The important thing is to get out there, find your limits, push them, and get home safe. You don’t need to get to the top of a mountain every time just as long as you get out, have fun and stay safe. There is nothing wrong with having to try again and the pain you get from pushing yourself gives a great sense of accomplishment.

Next time I think the plan will be to walk in to Glacier Lake the night before. Wake up, hike to the bivi, sleep, and summit. Then get back down to the lake, camp and walk out the next day. Or maybe try the same plan and see if we can make it a bit further either way I’ll be back to give it another go!

Photos were all taken by Keil he is a wicked photographer (I always forget to take out my camera).

Byron’s next adventure will be guiding one of our multi-activity tours, Journey to the Top of the World
and our Trek to the Last Shangri La, in the Langtang Valley, Nepal.