Under the Malediction of Makalu

Trekking to Makalu Base Camp Blog 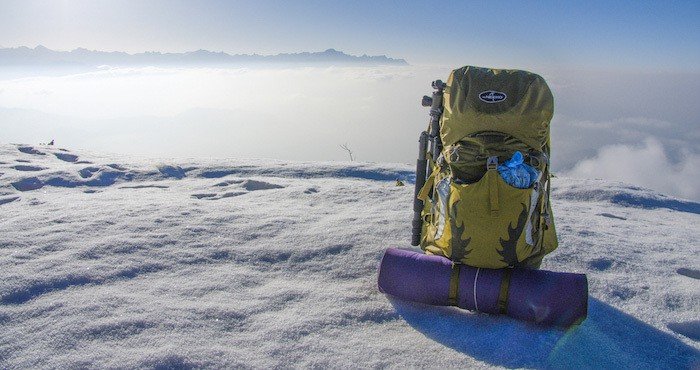 Acclaimed photographer and world traveller Julien Fumard joined our Lost Earth Adventure guide, Tshering, on the Makalu trek. Julien and Tshering were completing a reconnaissance trek for the upcoming season, checking trail conditions and lodges. Julien documents his extraordinary journey to the peak, accompanied by his breath-taking photography.

After being caught by “the virus of the mountains” in 2013 while trekking in the Nepalese Himalayas, I have been dreaming about coming back here. This time I wanted to experience something more adventurous, more remote. Makalu basecamp was high on my list and after a few emails with Lost Earth Adventures, it became reality… 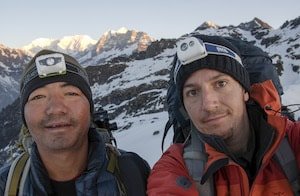 … but sometimes reality is a b***h, and so this adventure did not start on the right foot. Here I am in Kathmandu airport after 3 flights and countless hours in transit, waiting for my backpack to arrive, in vain. It’s been lost and nobody knows where. I will have to wait 48 hours to finally get it back. In the meantime, I learn that the guide supposed to accompany me to Makalu base camp had a family problem and will not be able to come. Another guide, Tshering, will come with me. So this is with a tight schedule that we plan to reach the base of the 5th highest summit in the world. 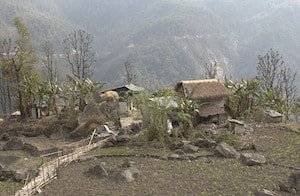 As we finally get into the already 3 hours’ late night bus carrying us to Khadbari, my stress level goes back to normal. But it’s only because I still have no idea that it will take us no less than 24 hours on sometimes dubious mud tracks to reach the little town, plus a 4 hour jeep ride sitting next to boxes filled with smelling chicks. Eventually, we reach the village of Num, on the top of the hill, where the trek starts. 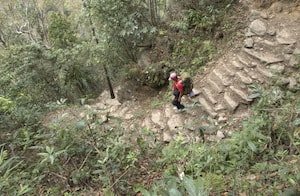 Unlike most of the treks I’ve done, Makalu base camp trek begins with a 700 metre steep descent through thick jungle. On the way, I am delighted to meet different kinds of people, this area being home of various ethnic groups such as Sherpas, Gurung and Rai people, among others.

After a few days spent in the jungle and through traditional villages we get worried. So far, we’ve barely seen the sun. “It’s like monsoon time” says Tshering, “not good!”. And he is right. We stumble upon a few tourists (a rare sight in this area) and learn that the passes are now closed because of too much snow. The news is devastating but we’ll go anyway. Maybe the passes will be opened meanwhile, we’re not giving up hope! 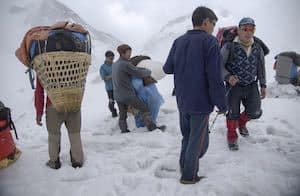 We meet in Tashigaon a group of Sherpas carrying equipment for an expedition. Will this be our chance to reach the base camp? From now on we will follow them in a one of a kind adventure. These guys seem to appreciate that I carry my own gear. “You’re a strong man” one of them says. “Well, my backpack is not even 20kg, yours is over 30, you’re the strong man!” I reply. We laugh. And laughing we will during this adventure, despite all the hardships. 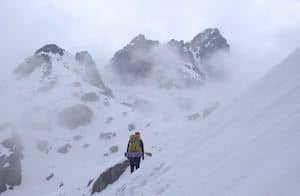 The higher we get, the thicker the fog. As we reach Dara Kharka, we can barely see what’s in front of us. It’s so wet that everyone in the dark and tiny tea house smokes as if a fire is burning inside them. But this isn’t clearly enough to keep us warm and we all spend time around the cooking fire to have the sensation of getting drier, somehow. This place is a photographer’s paradise. The lights are perfect and I’ll spend most of my time here photographing my new trekking partners, men and women from 17 to 50, all of them working for the expedition. 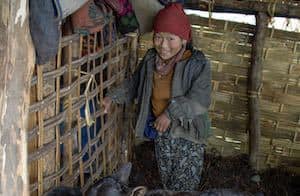 So far, I had no idea of what I would be going through. Quickly, our feet sink into a slushy snow which, after a while, gets up to our knees, and sometimes even hips. Of course, the harder it gets with the snow, the steeper the trails becomes. One foot after another we climb this never-ending mushy hell, and the sight of all these guys wearing plastic boots or tennis shoes and carrying 30kg charges give me the extra strength I need to reach the mountain hut of Khongma Danda, mostly buried into snow.

What a relief! Barely arrived, the women started a fire, cooked some tea and made the place comfortable. One cannot feel anything but admiration towards them. It’s a shame that I’m already engaged as I’ve been proposed in marriage quite a few times during the trek! 😉 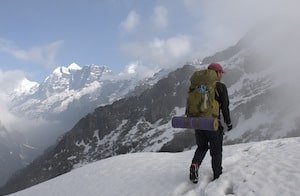 I feel happy that we went further than anyone before us. But the rest of the path remains to be opened. After a good night rest some Sherpas propose to open the track to the base camp. It will take at least a day. With the time we’ve got left, we will never reach it, but the further we go the better we’ll feel. So the next day we join the remaining Sherpas up the hills (a hill is up to 6000m for Nepali standards).

This is our second morning with sunshine, but I wished there was none today. The path is even harder than before and although the view on the mountains (and briefly over Makalu) is fantastic, I can’t feel but fear while seeing where we’re walking. After hours in half-melted snow, as we reach the 4100m high Shipton pass, we decide that it’s better to stop now. The danger of avalanches is too great. Tomorrow we will go back; the trek ends here. After so much efforts and expectations, I feel devastated, but as we say: “a good mountaineer is a living mountaineer”.

The ringing alarm clock brings sleep to a halt. It is 4AM. After a hot tea we leave the hut. My shoes are frozen, the sky is dotted by an infinity of stars and the snow is crunchy. That’s very good news: hard snow means less danger. A stray dog that has been climbing with the Sherpas joins us in the descent. The sun lazily rises, illuminating the mountains with its golden light and as we reach a promontory, the view on Makalu’s curves is unbeatable. I know the way down will be worse than everything we endured so far because of the melted snow, but right now I don’t care, I’m the happiest man on Earth!

To join us on an adventure to Makalu or to find out more about this experience you can visit our Makalu Trek Page. 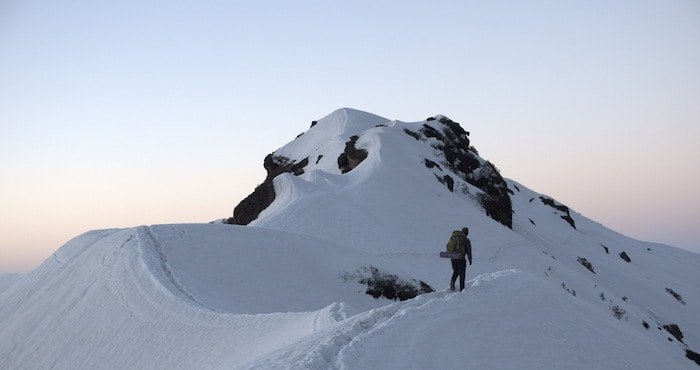