Driving out to Seti Khola (the trailhead of the Manaslu Circuit Trek) is a special experience in itself. The drive, in a rugged Toyota Landcruiser takes 6 hours to get to Arughat through breathtaking scenery. You really do need a 4X4 to conquer it! The road is one of the most remote I have ever traveled on, crossing the grain of the Himalayan foothills.

At Arughat you need to change vehicles. The locals have built an impressive road to Seti Khola and understandably so, they don’t allow jeeps from Kathmandu to profit from their hard work. We would need to negotiate for another vehicle to take us the rest of the way. 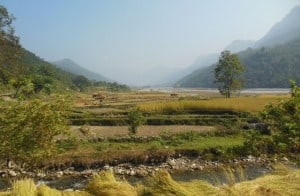 I asked my assistant Dipak to sort a vehicle for myself, and our companions Julian and his wife Rosa. Dipak came back after 5 minutes and said there was a bus we could take and that it would pass through in an hour. We had lunch and as the end of the hour was approaching I asked Dipak where we should catch the bus.

He replied matter of fact, “I call bus, bus come.” I thought this was a bit strange but said that we were ready to carry on. A further 15 minutes passed and there was still no bus. I enquired with Dipak again, wondering what was going on. His response was “You still want a bus? Or maybe you want a jeep?” Starting to get impatient I told him I didn’t care whether we had a bus or a jeep, I just wanted any form of transport, as long as it left immediately! Understanding my urgency and request Dipak said, “Ok boss, here is the jeep!” I didn’t understand what he was pointing at, as there was not a jeep in front of me. Dipak, responded again, pointing in the same direction, “Ok, there is the bus!” He had been pointing at a pick-up truck, which was very clearly neither bus nor jeep! I was confused, Dipak explained, “If we stop and pick up every passenger we pass, then it is a bus! It will get very full of people. If we don’t stop, and pay more money, than it is a jeep!” 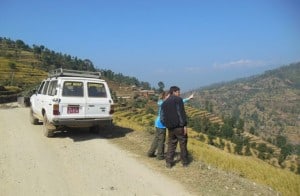 In the end, we took a jeep.

Finally we took off and I was keeping a close eye on my watch as I try to only use roads by daylight. We had only been moving for about 3 minutes before we stopped and pulled into a garage.

“Sir, we need to replace the suspension. Small job. Only 10 minutes sir!”

I knew this was not a ten-minute job, but alas this is adventure travel. The work on the truck was carried out efficiently by four men and an hour later we were traveling along a small road carved into the side of a steep cliff, finally arriving at the trailhead as the sun was setting.

Lofty Walkways, Local Firewater and Dodging Donkeys in the Himalaya 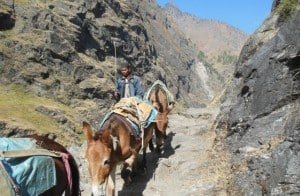 The next morning we trekked along lofty walkways through a steep gorge dodging long trains of donkeys to the village of Machhakola. We quickly learned the Nepalese saying for ‘donkeys coming’.

That night the whole village was partying to a large karaoke system that had been carried on someone’s head from Kathmandu. The music echoed down the valley and into the night.

Some of the young local girls looked like they had been practicing for months to do their solo dances, with the village watching in a circle and clapping. We were presented with flowers; I danced with the porters, drank some of the local firewater (raksi), ate some spicy dried fish and thoroughly enjoyed the evening. 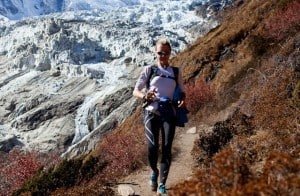 The trek followed the intensely beautiful Buri Gandaki valley for the next few days passing dazzlingly bright red poinsettia trees, many more donkeys and traditional Gurung villages. We even passed a bunch of nutty runners who were running around the Manaslu Circuit! They were part of high altitude adventure race. Click Manaslu Trail Race for more details.

In a remote, friendly, special and beautiful place 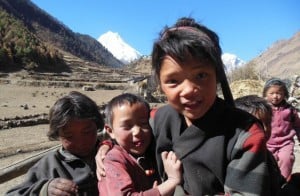 We caught our first glimpse of Manaslu at the village of Lho, its summit shinning brightly 5 kilometers above us! It was surprising how close the mountain was. We met a group of children with rosy-red windswept chubby cheeks that insisted in climbing all over me whilst shouting the English alphabet as loud as they could. When our stop for the night came into view it was then I realized what an incredibly special place we were in.

The high altitude stone village was guarded by large ancient chortens and smoke was bellowing from the many chimneys. The culture in the village of Sama has remained untouched for thousands of years. The people are Gurungs of Tibetan origin and not a lot has changed there over the last couple of centuries. We were greeted with many smiles and by locals peddling their wares. I was even offered a full yak’s skin for about £15. Another man rode past at full canter on his horse. A yak train passed by, bringing goods along the 6-hour hike from the Tibetan border. Huge glaciers cascaded from the Manaslu Himal and we were completely surrounded by 7000m peaks. I was so happy to be in such a remote, friendly and beautiful place. 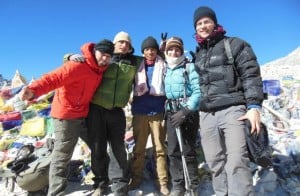 From here we spent 2 days ascending the 5100m high Larkye La following a path that negotiates the moraine to the side of the Larkye Glacier. From the pass we descended down to Bimthang, which was like an oasis in the desert. On a 3700m high alpine pasture we could see colourful gingerbread cottages. This was amazing! We had come down from high altitude where it was cold and inhospitable and we were now in cosy little cottages, far lower and warmer.
We indulged in a big hearty meal and a round of beers!

The next 2 days were spent enjoying part of the Annapurna circuit. On our last night myself, and the two porters, Dipak and Kumar prepared a large meal for us all. The owner of the teahouse we were staying in kindly let us run amuck in her kitchen and we prepared a feast. This was a great end to a spectacular trek.

Richard is the co-founder of Lost Earth Adventures and has spent the last 2 months in Nepal guiding a variety of different adventure tours and treks! Stay tuned for more updates from the trail. You can find out more details of our Manaslu Circuit Trek here.

Check out our Facebook Page to see more photos from these trips and our other adventures.