Trekking through Ghorepani and Poon Hill 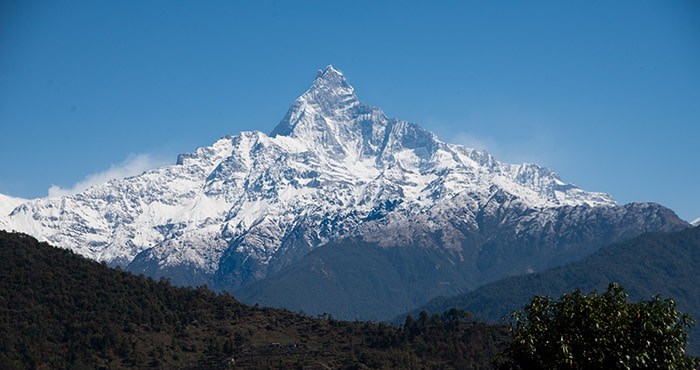 By the time I arrived, Kathmandu was in full swing. A symphony of car horns greeted us as we pulled out of the airport and into the chaos that is Kathmandu. Raj, our guide for the upcoming trek, sits in the front seat, pointing out famous landmarks as we zoom through the traffic, dodging fearless pedestrians and suicidal moped drivers. Eventually we pulled out of the chaos of beeps and honks and turned into a quiet side street rolling up to the entrance of Kathmandu Guest House. 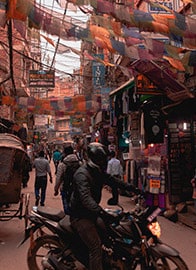 In direct contrast to the busy streets that surround it, Kathmandu Guest House is a quiet sanctuary in the middle of the city’s busy tourist district. Walking through the gates you find yourself in a quiet garden courtyard following in the footsteps of famous mountaineers and movie stars alike who have all favoured Kathmandu Guesthouse as their chosen place of residence while in Nepal.

After checking in, I’m guided back through the courtyard and across to the old wing of the guesthouse. On the way I notice the walk of fame leading up to the old wing. Names of politicians, climbers, explorers and celebrities remind you of the lively history that the Guesthouse has seen. 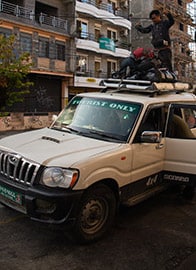 After freshening up, I leave the peace and quiet of Kathmandu Guest House behind and head out into the busy streets of Thamel to explore. Thamel is Kathmandu’s main tourist district. It’s hectic streets full of locals going about their day-to-day business and trekkers looking for souvenirs or picking up last minute gear before setting off on the trails. Signs that look like they’ve endured the test of time line the streets advertising outdoor pursuits and various wares for sale. Dodging rogue mopeds and impatient rickshaws I potter through the streets getting lost and discovering magic at every turn with dynamic characters smiling and saying hello amongst the chaos and pockets of quiet surrounding understated shrines and temple entrances.

During a traditional nepali meal with my fellow travellers, Raj teaches us all about the wide variety of cultures in Nepal as well as the country’s history, and then we all opt for an early night so we’re ready for the road ahead tomorrow.

The Road to Pokhara 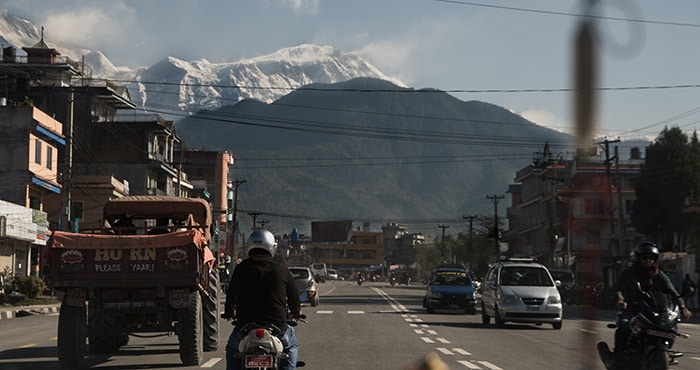 The next morning, we load up our bags and hop in the minibus to head off to Pokhara and ever closer to the trails.

The road to Pokhara is long and winding and we spend most of it passing a never-ending stream of colourful trucks and buses adorned with everything from pictures of Hindu deities, to Manchester United FC Logos. Slogans such as ‘Road King’ and ‘Speed Demon’ written across the front bumper. After a stop for lunch at a popular all you can eat buffet, we’re back on the road and moving much faster now that the traffic seems to have thinned out. A few hours later we arrive in Pokhara, just as the weather is starting to clear, giving an atmospheric misty view over Lake Phewa as solitary fishermen began to make the most of the break in tourist boats on the lake. 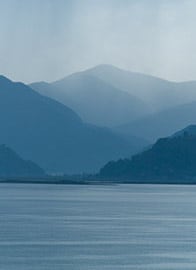 After a relaxing night by the lakeside, we set off from Pokhara to the trail head and embarked on our first few days of trekking. Passing through thick Rhododendron forests, quiet villages, terraced hillsides and over surprisingly sturdy suspension bridges as the sun shone overhead. Much of the trail takes you up staircases cut into the sides of the mountains meaning you gain height quickly, leaving the forest behind and giving incredible views stretching for miles back down the valley. Our first two days were spent in the warmer lower terrains but as we climbed higher up to Ghorepani, we started to walk through a mist of cloud. The trail ahead was obscured from view as we ventured on, feeling very much like we were in an Indiana Jones or Tomb Raider movie. 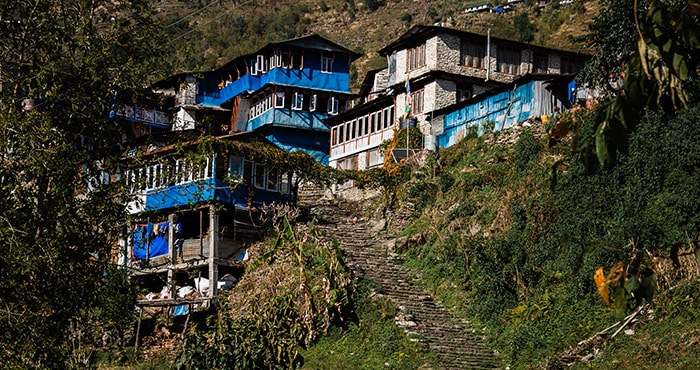 We breathed in relief as we reached a sign welcoming us to Ghorepani and marking a reprieve for our calves from the steep staircases.

Raj had paused and grinned at us as we caught up with him. When asked whereabouts we were staying he cheerfully informed us that this was lower Ghorepani and that we were staying in Upper Ghorepani as he quickly made his way up the path. So onwards and upwards we pushed, on to the blue roofs just visible though the clouds, a Shangri-La in the distance, and our beds for the night. 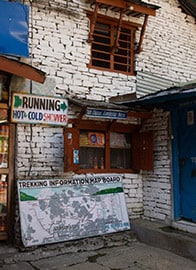 When we reached Ghorepani we were greeted by the porters who had long beat us to it and given hot tea and a dinner of Dal Bhat to warm us up. Dal Bhat is the delicious local dish of steamed rice and lentil soup. It is credited for being the magic behind how the guides and porters manage to take on the steep hillsides in record time day in and day out. ‘Dal Bhat Power, 24 hour’ Aneil informs us with a knowing grin on his face as he brings our food over.

From Ghorepani the trail rises steeply and we stop to catch our breath at a monument at Thapla, at 3165m high and with cloud starting to clear, we get our first sighting of Annapurna South up close and personal.

The views of Annapurna South and Macchapuchare, the holy mountain, are exactly the picture-perfect image that your mind conjures up when you think of trekking in the Himalayas. The snowy giants would be in the background from here until we hit the lower trails in a few days and as much as I enjoyed seeing all the different terrains through the Poon Hill route, the mountains made me catch my breath every time I’d spot them in the distance. 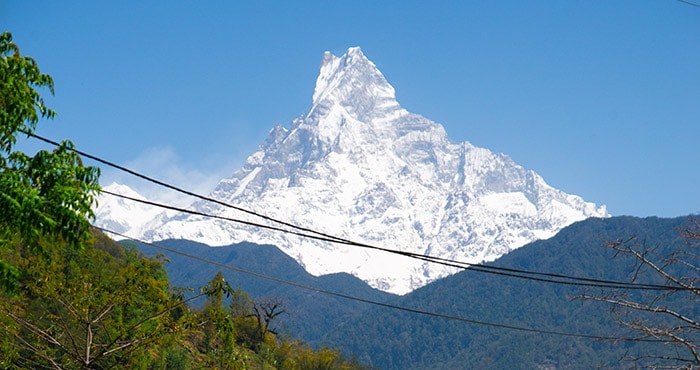 We reached Tadopani mid afternoon. With cloud obscuring the view and a few hours before dinner I decide to take a quick nap.

An hour or so later I’m awoken by a loud, constant clattering on the roof and as I come to my senses I realise it’s hailstones. I sniff, a weird smokey smell filling the room. Groggily I walk over and peek out the door to see hailstones the size of malteasers bouncing off the terrace in front of me. I stand for a minute or two, just glimpsing sight of the far off peaks through the cloud as lightning flashes and thunder peels around me. Suddenly three guys rush past me, leaving the safety of the covered walkway and into the thick of the storm, the first carrying a chair followed closely by a man with a long wooden pole dragging behind him and a second or two later one rather brave man in a tshirt and shorts runs out with an umbrella. I watch as they run over to the tank on the roof with a now smoking pipe beside it. The man with the pole hops onto the chair and starts fishing down the pipe with the long wooden stick. Hailstones crash down around them and after a few minutes a large bellow of smoke wafts out of the pipe. Success! The three men cheer, pick up their chair and run back down to the teahouse common room. 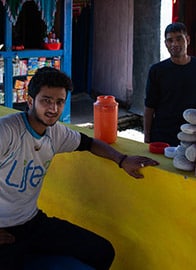 Shortly after, I follow suit down to the main room to find weary trekkers and tired travellers making the most of the heat. As soon as I open the door I’m hit by a suffocating wall of smoke, my eyes watering as I grab a seat near the fire. The owner of the teahouse is poking the fire periodically with a concentrated frown on his face, trying to figure out what’s gone wrong. With more smoke escaping the metal burner and the occasional orange glow from a lick of flames he eventually concedes and throws open the front door as hailstones continue to bounce off the ground. Gradually, one by one everyone starts offering their own take on how to stop the fire smoking, none of which actually appear to have much success.

The three fearless warriors grab their gear and head back up once again to tackle the problem from the roof. Eventually someone opens another door and the teahouse owner starts lobbing still lit logs out into the cold in an attempt to calm the fire while the teahouse’s resident cat watches on with a look of disinterested boredom. Eventually the fire dulls and comes back under control, just in time for the owner to add a few more logs and start the whole humorous saga all over again.

Over tea and biscuits we trade stories with our fellow trekkers and gather words of wisdom from the more hardened climbers among us. After a hearty dinner, the storm clears and we head upstairs for the night to spot the sun setting behind Annapurna South and Macchapuchere. In awe of the almighty peaks towering around us, I head to bed, my head full of travel stories from across the Himalayas and magical views.

A View of Annapurna South 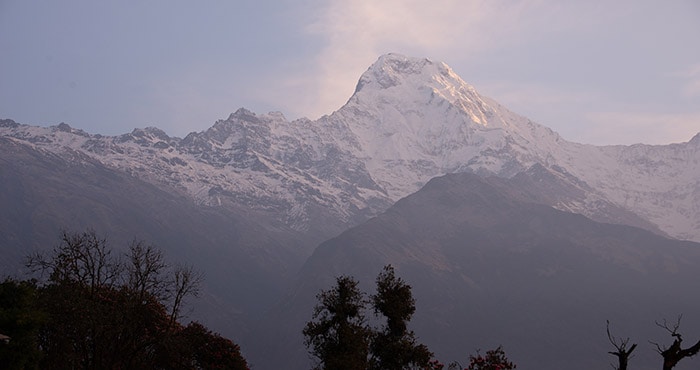 Sunrise gave way to more stunning views over the pair of mountains cheering us on and from Tadopani we dropped down the hillside into thick jungle as the sun came up.

With temperatures rising, we made our way down the sun dappled paths with an accompaniment of bird song and stopping periodically to look at the Grey Langurs crashing through the trees. The downhill lured us into a false sense of security and we were quickly learning that in Nepal, what goes down, must go back up as we began climbing again before dropping down into Jhinu Dhanda.

We arrived just in time as a tropical storm began to pick up and we watched from our teahouse as the lightening passed over us and down the valley. As the rains stopped we gathered together for our last night in the teahouses with a pack of cards to keep us entertained. With everyone in high spirits after dinner, Raj and a few other guides began sharing their best card tricks, delighting trekkers and porters alike before retiring for our last night in the mountains.

When you imagine Nepal, you think of massive mountains, snow and mountaineers but Poon Hill and Ghorepani take you on a tour through a multitude of terrains and different cultures. If you’re looking to see just how diverse Nepal is, Poon Hill is a must as it lets you take in just as much of the famous mountains as it does the colourful Rhododendron forest and dense monkey filled jungle. It lets you see just how much more there is to incredible Nepal than just the mountains that it’s become famous for.

Interested in experiencing the diversity of Nepal for yourself? Book the Ghorepani and Poon Hill Trek, Nepal here. 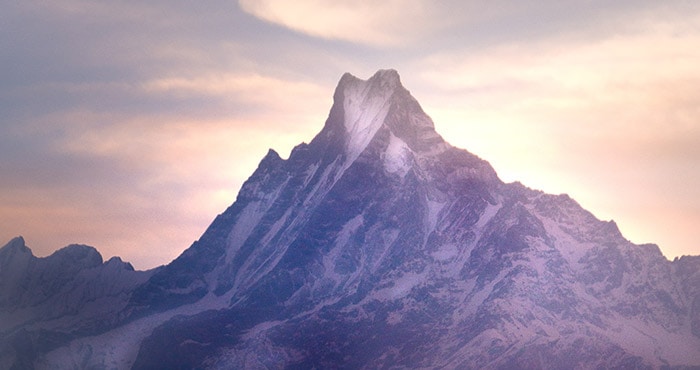