The 4984m high summit of Tserko Ri, the 4600m high Laurebina La (pass) and the holy Gosainkund Lake were all on the cards on last month’s expedition to the Langtang Valley in Nepal. This was not to be an easy feat within our timescale of 12 days of trekking. To achieve such lofty goals would mean long days of trekking and no rest days, but rest assured our team was up to the challenge! 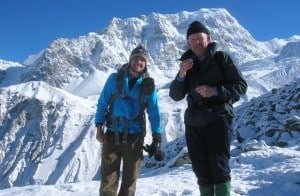 The trekking team consisted of clients; Peter, Anthony and Iain, guides; myself (Richard), Bhairesh and KP and porters; Deepak and Ram G and was to start from Kathmandu. At the last moment we received the news that Peter would be held up in the UK due to business commitments and would not be able to meet up with us until 4 days into the trip. With this spanner thrown into the works it would mean that all of our planning had to run smoothly and without further delay.

It also meant that we would have to start the trek without our fellow mountain comrade Peter and that he would meet us in a few days’ time in Thulo Syraphru – a remote village situated at 2210m and a day’s walk from the road. 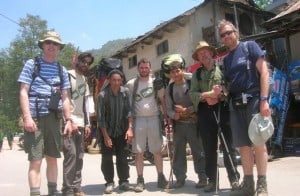 I left Kathmandu with the remaining team while KP stayed behind to wait for Peter. We were making really good time and were at Kyanjin Gompa (3800m) by the morning of the 3rd day. After arriving we had some lunch and trekked out to one of the very large glaciers that cascade down the side of the 7000m high Langtang Lirung. This allowed us to ascend to 4300m and get further acclimatised for the ascent of Tserko Ri the next day.

Forced to forgo a good night’s sleep due to the threat of more snow that could potentially thwart our summit attempt we decided to depart Kianjin Gompa at the early hour of 4am. We ate our breakfast of chapattis and hard boiled eggs as the sun came up a good third of the way into our climb. The snow had been falling every morning above 4000m and as luck would have it, we were the first party to start the climb. This meant Bhairesh and I had the arduous and laborious task of breaking trail through the thigh deep snow. 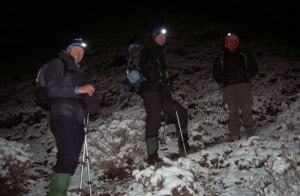 5 hours later we were standing on the summit all by ourselves, with totally calm skies and outstanding views of Shishapangma (8013m), Langtang Lirung (7225m), and Dorje Lakpa (6973m). We all shared the moment for about 10 minutes, feeling the elation of our achievement. Unfortunately it was short-lived as we could see an obvious storm front coming in and began our descent rather hastily.

On our descent we came across a Belgium man holding his semi-conscious friend upside down, shaking him vigorously. It was clearly apparent that the semi-conscious man was suffering from altitude related problems and his friend was not doing him any favours by “shaking the blood back into his head.” This is no way to treat altitude sickness. The man was showing signs of High Altitude Pulmonary Edema and was in bad shape. I gave him some Diamox tablets and forced him to drink some water. Bhairesh – our high altitude mountain guide from the Solo Khumbu picked the man up over his shoulder and rapidly descended down the mountain side, dropping about 1000m in an hour. 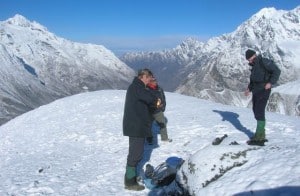 The Belgium man made a rapid recovery and was now in better shape than the rest of us who ran down the mountainside trying to keep up with Bhairesh! After making sure he was indeed alright we continued on back to our base at Kianjin Gompa. Due to our time constraints and the fact that we were meeting Peter and KP, we had a massive lunch, before starting our trek back down the valley for some celebratory beers.

Peter arrived the next day, looking very fresh faced in his nice clean clothes! We had a nice treat of a warm solar powered shower that night and shared our stories over a few glasses of beer and games of Pass the Pigs! The following day we took to the trails slowly allowing Peter to acclimatise affectively and ourselves to recover from the very long days we had prior. Two short(ish) days of walking took us through beautiful forests of rhododendrons, yak pastures and alpine meadows until we reached Laurebina where the trail leads sharply upwards taking us high into the Himalayas and onwards to our next goal of reaching Gosainkunda Lake. 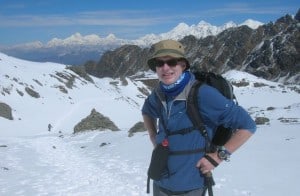 We arrived at Gosainkunda Lake which is considered holy by Hindus, where it was unusually frozen for this time of year. Here we met a Sadhu (holy man) whom had been sitting by the lakeside. He has been meditating at the lake for over 2 years and the small, bare stone hut he uses for shelter also lacks any form of heating. Dressed in a blanket with long dreadlocked hair, smoking a chillum, he appeared at peace with his world and his god.

We gave the Sadhu some Snickers bars as an offering, while KP, Bhairesh and the porters took a blessing from him.

Our next challenge was the 4600m high Laurebina Pass. As we made our way over we had stunning views Manaslu and Annapurna, the world’s 7th and 10th highest mountains, as well as of Ganesh Himal (7422m). From the top of the pass we could see our route for the next two days that would take us down into the Helambu region. 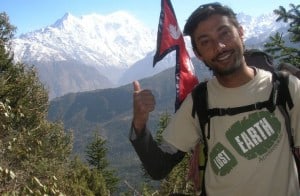 Descending from the pass, the hardest part of our trek was over and it was time for a party and to let loose. We bought a jug of homemade wine and a chicken, where the woman at the teahouse cooked us a feast. The Nepalese guys also showed off their dancing skills! From here we headed through Shiva Puri National Park back to Kathmandu.

After a warm shower, a hearty meal and a good night’s sleep in Kathmandu it was time to tour the city and reflect on a successful and great trip!

For more information about this trek please see our Langtang Valley Trekking page.