Our Journey Through the Himalaya – November 2012 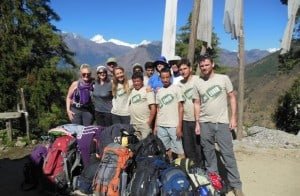 The drive into the Langtang is along a peaceful country lane that winds its way through the Himalayas and goes nowhere except the trail head of the Langtang Valley. It gives great views and we met barely any traffic. We took our time stopping along the road to talk to locals and take in the scenery.

We left our jeep at Syrabru Besi and walked through thick forest following the powerful Langtang River. Conversation was a plenty and the group soon became a team as we climbed steadily towards the highlands of the Himalaya. 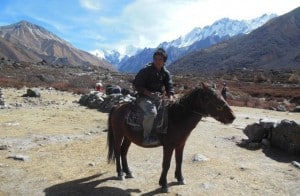 The sun was shining and many tea stops were enjoyed watching the monkeys playing and listening to the birds. Kerry wasn’t happy just sitting around and could often be found upside down, resting on her head or teaching our porters how to sit in the lotus position. Kerry runs a yoga retreat ‘Balance KMC’ and was enjoying the tranquillity of practicing in the Himalaya.

The group expressed they would like to do a big walk. They were interested in crossing the Laurebina La, past the Gosainkunda Lakes and into Helambu. This is a massive walk but gives so much variety and amazing scenery along rarely used paths. I was happy for this decision too! We walked to the Langtang Glacier, climbed Tserko Ri then descended back to Changtang.

The next day was a mammoth walk where we completed a normal day and half’s trek in one day. We hiked for 8 hours to the bottom of a big hill where night set in. I explained that if we walked for 3 hours through the forest in the dark we could have a decent guest house with hot showers, good food, great views the next morning and a rest day the following day. The alternative was to stay in a dingy tea house with no meat and no showers!

Suprisingly everybody opted for the dark walk in the forest, which after a long hike I was very impressed with the determination. We all don our head torches and headed up the hill. This was an exciting outing with the porters making bird noises and playing their Nepalese music, there were 12 head torches snaking through the forest lighting the way. The air was crisp and humid and our senses were awoke to the sounds of the Himalayas at night.

The next morning our choice to carry on had gone down well when the group woke up to a hot sunny day in a pretty village offering a spectacular panorama of the Himalaya. Breakfast was had al’ fresco and we soaked up the rays. 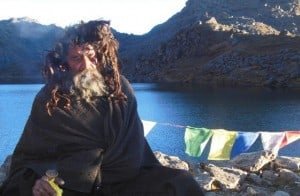 At the Gosain kund Lakes the Baba was still there meditating (see last Langtang post) but it was remarkably warmer. This and the setting sun inspired Kerry and Ella get on with some yoga. We arose early and headed up to 4600 meters to cross the Laurebina La and leave the high mountains behind to descend into the lush middle hills which where hidden thousands of meters beneath the clouds. 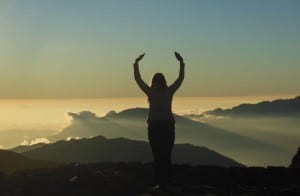 We could see many mountain tops shimmering in the morning light a hundred kilometers or so to the south and 200 kilometers to the west with clear views of the 8 kilometer high mountains of Annapurna and Dhaulagiri. We traversed high ridges and mountain tops high in the clouds as we crossed the grain of the middle mountains, meeting very few tourists.

This is where the majority of Nepal’s population live in the warmer climate and on lush fertile land many days walk from roads. They live peacefully sustaining themselves from the fresh produce they grow and remain untouched from modern society.

On our last night we wanted to give our hard working Nepalese companions a good send off. I bought a couple of plump chickens which Kumar turned into a tasty curry. We got invited into the families simple home where we shared our meal with 3 generations. It was nice to see the family living in such harmony in a house that had been built with the grandfathers bare hands. The little children cuddled up in blankets asleep round the fire.

The next day was a short walk through rice terraces of bright yellows and greens to Chisapani where we stopped for dinner and met our jeep to return to Kathmandu. We all had the day to explore the enchanting city, some opted for spars and pampering and others for a scenic flight up to the face of the worlds highest mountain.

All in all a great time!

Richard is the co-founder of Lost Earth Adventures and has spent the last 2 months in Nepal guiding a variety of different adventure tours and treks! Stay tuned for more updates from the trail. You can find out more details of our Langtang Trek here.

Check out our Facebook Page to see more photos from these trips and our other adventures.