Getting Extreme in Nepal

Dispatches from the Trail

We’re half way through our second Nepal Xtreme tour of the season, and I’ve been eagerly showing a fantastic group of clients (which I’m now pleased to call friends) some of the very best that Nepal has to offer. We’ve travelled throughout the Himalaya making the most of her long, curvy aspects and curry-cooking locals. 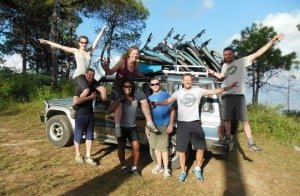 The tours both started with some relaxing and a sight seeing and cultural tour of the Kathmandu Valley, with its many impressive temples. Afterwards we left the bustle and fast pace of the city, heading high into the mountains.

First we drove to an elevation of 2200m, fifteen kilometres from the Tibetan border. Here we undertook two canyoning expeditions into the 165m deep gorge that houses the wild Bhote Kosi. 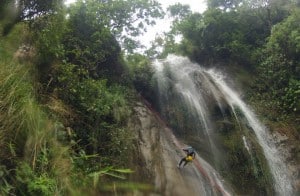 This involves abseiling and sliding down eight tiers of an incredible large waterfall. Everybody learned the ropes quickly and all were apt at the art of being pounded by water whilst negotiating slippery and exposed terrain.

Laurie, Graham and Chris are the only people so far this year on a Lost Earth Adventures trip to make the leap from the 500ft bungee bridge. All 3 lads were remarkably composed in such a terrifying and exhilarating experience!

Due to unusually high water levels for this time of the year we’ve not been able to run the upper section of the Bhote Kosi. The upper section has been constantly monitored by our guides and has been deemed to risky for the time being. We had all been quite anxious to raft the 20kms of continuous class 4-5 rapids! Wanting to keep our thrill levels up and adrenaline pumping we decided to kayak the white water of Sun Kosi. 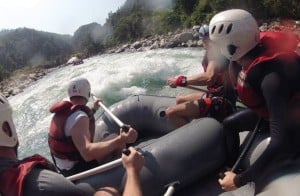 The instructors did a stellar job of teaching and guiding us through the rapids. After originally rafting this section the group wanted to experience negotiating the rapids in their own kayak. The waves appear so much bigger when lower to the river and it’s highly rewarding to be in control of your own boat. The four sections of class 2 rapids provided the adrenaline we craved.

The flats were a welcomed event, with long, wide and smooth glistening sections carving through rice terraces, topped off with sunny views of the mountains!

Next we boarded a Twin Otter and flew high into the Mustang following the path of the Kali Gandaki – the world’s deepest gorge. From the windows we had a clear view of the world’s 7th, 8th and 10th highest mountains – Dhaulagiri, Manaslu, and Annapurna. 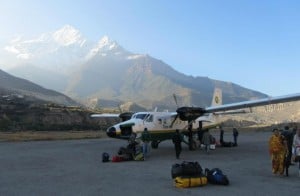 At the small enclave of Jomson we negotiated for two very rugged, Indian made jeeps to climb the next thousand metres. The afternoon was used to relax, acclimatise and discuss the next days’ events. Eager to ride, we spent the last hour of daylight with our guides showing off their riding skills and taking us to their favourite trailheads and viewpoints! 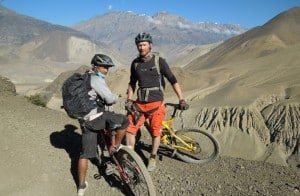 Then it was down… 3 days of down! The first 20km is steep, rocky and everything you want from mountain biking. We were given options of a wide, rocky and rarely used jeep track or to take the menacingly steep single track that cuts the more direct line. Raj Kumar and Jarrah took the path of least resistance and were well in front of the group, leaping from every lump on the mountain!

We had made it back to Jomson for tea and apple pie, made with apples fresh from the orchards that line the trails below. It is here that the jeep tracks deplete into the vast riverbed of the Kali Gandaki and where you and your little bike have to negotiate river crossings, rough Himalayan terrain, large trains of donkeys and goats and the occasional puncture! This is adventure cycling at its best, being totally self-sufficient surrounded by the world’s largest mountains. 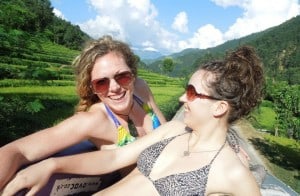 We continued mainly downhill for the next 2 days where we spent the night at a place called Tatopani, which in Nepalese means hot water. So as the name suggests we got to soak our muscles in the natural hot springs, this experience was enhanced by the constant supply of cold beers. Life doesn’t get any better than this! 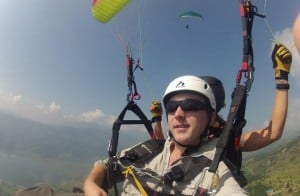 The next day we headed back to Pokhara for some R ‘n’ R but as the group were not the sort to sit around doing nothing some paragliding, motorcycling, row boating and helicopter rides were arranged.

Never a dull moment, thank you guys for a great time.

Richard is the co-founder of Lost Earth Adventures and has spent the last 2 months in Nepal guiding a variety of different adventure tours and treks! Stay tuned for more updates from the trail. You can find out more details of our Nepal Xtreme Adventure here.

Check out our Facebook Page to see more photos from these trips and our other adventures!