Mad Adventuring on the Kang La and the Village of Naar

Trekking to Naar, Phu, Manaslu and Beyond

We just received these stunning pictures from Matthew and Jessica Szelag who joined us in Nepal for an incredible trek last November. They are an extremely athletic and motivated couple who when I first spoke to them about their trek I thought they were completely mad!

Condensing 7 weeks of trekking into less than 3!

Not content with just one trek they wanted to do 4, back to back in 18 days! Their plan was to trek around the Manaslu Circuit, the Annapurna Circuit, detour to the villages of Naar and Phu and then continue onto Upper Mustang, crossing 4 passes over 5000m and walking close to 200 miles. We are always up for a challenge and never like to say something is impossible but even running for 12 hours a day for 18 days straight, completing this itinerary looked pretty unlikely. 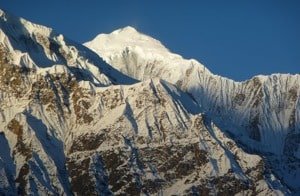 I suggested that if they cut out Mustang and did the rest of the itinerary it might just be do-able. We arranged the permits and called our strongest guys. I wasn’t very confident that they’d make it and told them not to be to disheartened if they didn’t when I joined them for dinner and wished them luck the day before they set off in Kathmandu. I asked them to keep me updated on their progress. They looked pretty strong and if anybody was going to do it these were the guys for the job.

Bhairas and Kumar, both tough guys that grew up in the mountains were as unsure as me about the plan and these guys had the added pressure of a very big job ahead of them. Both would be running over the mountains for the next couple of weeks with Kumar carrying the support gear. 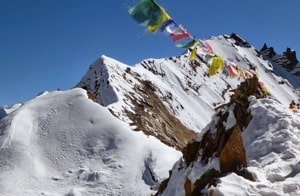 The next day they were off and starting around Manaslu at full speed eating up a standard two days trek each day. When crossing the Larkya La, a 5200m pass on the Manaslu Circuit, due to bad weather and large amounts of snow they had no choice but to start the day at 2am and include an extra 500m of ascent to an already demanding day. The normal lodge which houses trekkers had closed due to the savage weather.

While other teams took 18 hours to cross the pass and descend to Bimtang our team took 10! Next was a jaunty downhill trek to the welcoming up-market huts of the Annapurna Circuit to get refreshed and a hearty meal before leaving the tourist trekkers behind and heading to the wilderness of the Phu Valley. This is real adventure trekking. There is very limited information on this region and we were not a hundred percent sure if they’d get a proper place to stay in or whether they were going to have to rely on Bhairas’ negotiation skills to get the locals to put them up. A tent would normally be advised for this type of trek but this would only slow things down and these guys are not ones to be held back by silly things like warmth and comfort. If lodging wasn’t available they’d keep walking until they found some that was. 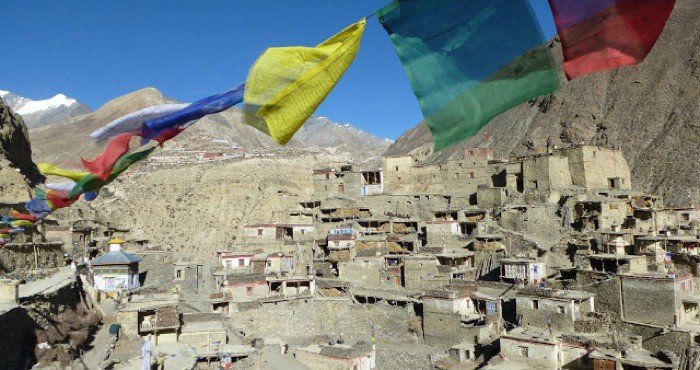 They were also not sure if the pass was going to be feasible due to snow and if they could cross back to the Annapurna Circuit. The only way to see if it was possible was to take the lengthy climb to the pass and have a look. The risk was a 3 day walk round trip back the way they came! Luck paid out however and our guys crossed the pass, I will let the pictures do the talking now as you can see this is a trek with pure WOOOOOOOAAAAAARRRRHHHHH factor!

To join a trek with us visit our Nepal trekking page.