Beyond the Beaten Path – Langtang and Gosainkunda Himal

A Trekking and Climbing Adventure in Nepal

Here we go the first instalment of the autumn 2013 Lost Earth Adventures’ blog, and where to start… an amazing Langtang journey for some great trekking and our attempt to climb something over 5000m. 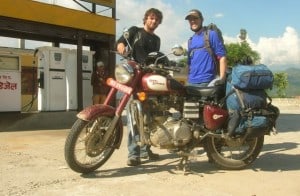 Richard and I both landed in Kathmandu on the 20th of September with itchy feet. There were a few days of work to be done to get ready for our fall trips but as soon as we could we were off to the hills. We rented a great bike to get us there, a Royal Enfield Bullet. 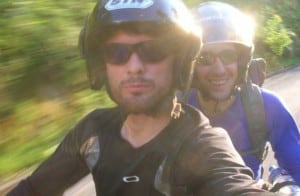 Everything had to fit on this bike so we packed our bags with minimal gear, one change of clothing, lightweight sleeping bags, waterproofs, and an extra pair of underwear that would need to be washed nightly. For the climb we also bought a set of nuts, 4 small cams and a 30M rope.

Heading out of Kathmandu we took to the open road, well in Nepal’s case the narrow winding road, for a six-hour spectacular drive to our first stop, Dunche. We stayed at the Langtang View Hotel, a great lodge with an amazing dinning room to boot. We like it so much we stay here on all of our trips that begin or end in Dunche. 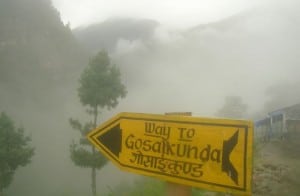 The staff welcomed us with open arms providing us with cold drinks, a great meal and some terrific suggestions for future trips that are seldom seen by western trekkers. The owner of the hotel was also kind enough to store our bike and secure us seats in a jeep to take us the last couple of miles to the trailhead. So after a good nights sleep we were off to Syrabru Besi.

After completing some work we set off at 1.00pm, on our own without a guide or porters, which I do not advise unless you know the area extremely well as there are trails everywhere and none of them marked. However, we had plenty of time to reach our goal of Lower Rimchee. 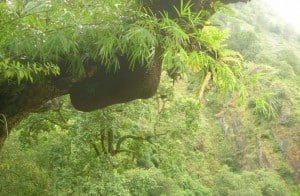 The trail was in great shape with only one obstacle to pass, a bees nest the size of a beer keg but we were able to make it past with very little trouble. It was about 6:30pm when Richard and I came into view of the teahouse. The sun was down and we were ready for a nice big plate of Dal Bhat and a jug of chhaang to wash it down. This is the local equivalent of beer and a steak. 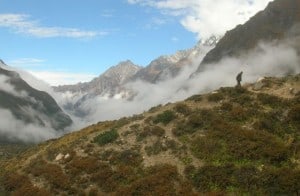 The subsequent 2 days were spent exploring the breathtaking Langtang Valley and looking for great new places to take our guests (many were found but we are not going to give away all of our secrets). After a night of fun with the locals at Lama Hotel we were back on the trek and completed a long hike up to Thulo Shyapfru. The hill normally takes an hour to walk but we ran up it in 25 minutes for some sort of sadistic entertainment.

In the forest we met ‘Sita’, a girl from the village of Thulo Syrafu. Her parents asked us to escort her on the hour and a half journey to the next village in order to keep her safe. Maybe they wanted us handsome men to marry her, but who knows? Sita told us she was living with her mom and dad in a small teahouse with no power and, like most girls her age, needed her phone and was prepared to walk an hour and a half in order to charge it. 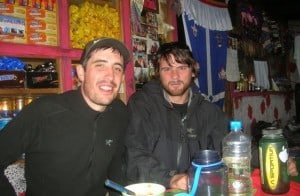 After a short day of walking and more exploring we arrived in Shin Gompa, an amazing village set at 3330m. It comes complete with many amenities such as a Nak cheese factory, a raksi shack (drinking den) and, when the sun is out, hot showers!

Richard and I found a great new teahouse here, called the Yak and Nak, it will be our top choice next time we are in the area.

Following this Richard and I headed up to the Gosainkunda Lakes to find something to get to the top of and start the real fun! The weather was not the greatest but clouds sometimes make the best pictures in the Himalaya. When we arrived we started the reconnaissance, the weather was bad and judging by the forecast it was not going to improve, so our original idea of ascending unclimbed peaks over 5000m was shot down. 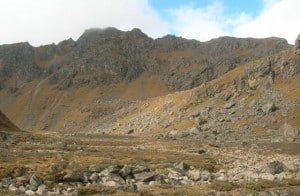 However, after much surveying and running around in order to find some virgin terrain, our chosen objective became a ridgeline across the North. It looked good, had a few steep pitches for us to have some fun, and route finding would still be easy if the weather went bad.

Waking at 5am the next morning we were ready to go out and have some high altitude excitement. Unfortunately Mother Nature did not want us to partake. The cloud was as thick as chocolate milk and showers were off and on. So what to do… wait, and wait, and wait some more and if some friendly Israelis with amazing coffee show up, drink it!

As time was passing, the visibility was not getting better and our chosen objective was slowly fading away. So like any good Himalayan expedition we had a back up plan; find a rock to scramble about on and practice some rope work.

Armed with our meagre rack built for spicy scrambling, 1 set of nuts and 4 small cams we found a great fin like feature to scramble about on. Just getting out there and placing a bit of gear was great. 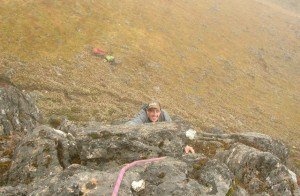 We climbed a bit and weaved our way up with some fun easy moves. Over the top and with a high five and a feeling of accomplishment we hiked back to the teahouse. It was mostly just easy scrambling but worth it to practice at high altitude and train for bigger things. 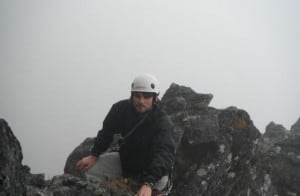 We would have liked to spend a few more days at Gosainkunda to get the right weather but we had to return to Kathmandu to meet the first guests of the season. We felt quite lucky to get a couple of weeks to ourselves to have a play and explore new ground. So we left in high spirits and enjoyed a great sunset as we descended down to Cholong Pati. 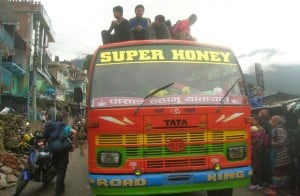 The next morning the trip back to Kathmandu began, a quick walk back to Dunche to spend another night, pick up the bike and start the ride home. The fun did not stop here. There are two spots that see a lot of landslides during the monsoon season so there is no paved road in these areas.

Every year after the monsoon they rebuild the road until the next years monsoon. Steep roads like this are best avoided during the monsoon season or during heavy rains. Our journey back to Kathmandu was via one such road and because of the rain the road was a bit muddier than on the way there. 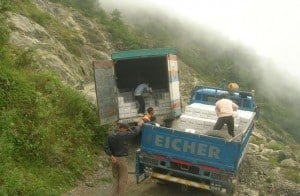 For us this meant a lot of fun and slipping around on the bike, but not for others. On route we found a truck full of bottled Himalayan spring water that did not have enough power to make it up one of the hills. So what is the Nepal way? Bring in another truck, unload the boxes and take another run at it. As you can see by the photo, on a narrow road this is easier said. However, we made it back ready to start our next adventure!

Does this story interest you? We have still have limited availability on some of our trips leaving this season. Why not come and join us? Have some fun and come back with some great stories that will make your mates more than jealous.