Rebuilding for the Future 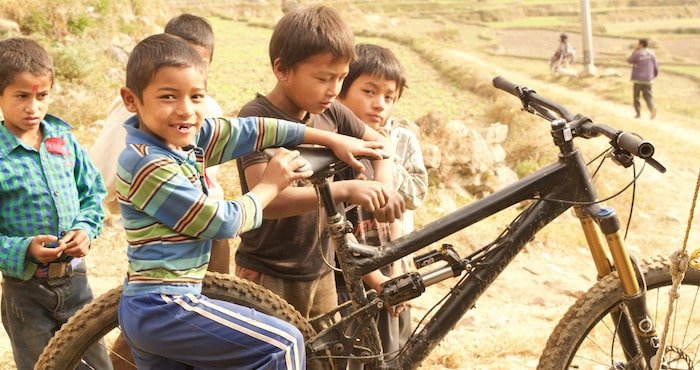 Lost Earth Adventures and our charity, Share the Load Foundation are funding the rebuilding of a primary school in Shirkhabesi, an area of Nepal devastated by the April 2015 earthquakes. Construction of the Shree Krishna Primary School began on the 7th December 2015. Company Founder, Richard Goodey recently visited the village (cycling from Kathmandu) to see the project come to life and to speak with students, teachers and community members. Richard writes of his experience below: 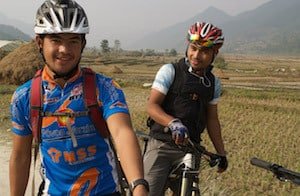 Rajan and Ron, two of Nepal’s most talented professional mountain bike racers were waiting for me at the bike shop in Kathmandu. Rajan is within the country’s top five and both compete internationally. It was 10am and we were due to be riding our bikes to Shirkhabesi. The lads were all smiles as they told me it was going to be a leisurely 4-hour ride. I envisioned a distance of 40km through the stunning Nepali foothills. I was absolutely shocked when they nonchalantly told me it was a 75km trip (one way) with over 2000m of ascent, 40% of which was off-road! They also warned me of a 17km hill climb (4km longer than the infamous Alp d’Huez hill in the Tour d’France).

Both Raj and Ron are part of Nepali Cyclists Ride to Rescue (NCRR), an NGO comprised of professional mountain bike riders whom were some of the first guys on the ground helping people in the aftermath of the earthquake. Their knowledge of the footpaths and tracks that intertwine the villages close to Shirkhabesi was paramount in ensuring that emergency supplies got to the right places, at the right time. We are proud to be working in conjunction with NCRR to rebuild the Shree Krishna Primary School, as part of a wider project to rebuild 7 schools in 7 weeks. 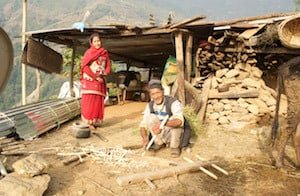 Shirkhabesi is a remote idyllic village, a far cry from Kathmandu and its hectic pace of life. The village’s namesake literally means flat place below the mountain. And it’s true, Shirkhabesi has existed here for centuries, in a sublime alpine meadow, nestled high between lofty Himalayan summits. The beauty of its surroundings is immense. However, directly beneath the surface is a fault line between the Indian Sub-Continent and the Mongolian Plateau. In April 2015 the earthquake rocked this village, bringing homes, buildings, health posts and the primary and secondary schools down with it. 90% of the village and the surrounding neighboring settlements have been destroyed.

Gripped with fear, I put on a brave face and said, “let’s do it!” The distance, mountain biking 75km seemed unfathomable to me, and I genuinely didn’t think that mentally or physically I was up for the challenge. We negotiated our way through 15km of Kathmandu traffic, weaving our way past rickshaw drivers, heavy-footed taxi drivers and an abundance of freely roaming holy cows. Finally, we were out of the congestion, but a very daunting 7km hill was our next obstacle, not something I was looking forward to. I did get to the top and it was a relief and pleasure to spend the next couple of hours freewheeling my way to Chharhare Bazaar – the halfway point. My emotions were as up and down as the hilly terrain I was riding on, at this point I knew I could do it, at ¾’s of the way, I was certain I couldn’t! Shortly after was sunset and we carried on into the darkness, climbing hard through the forest. This however is nothing close to the suffering and hardship the people of Shikharbesi are facing. 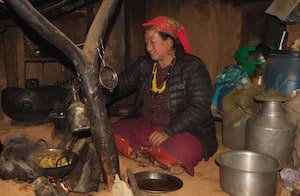 Arriving in darkness we put our bikes in a temporary relief shelter and proceeded on foot for another half hour to Ron’s family home that has just been re-constructed after being destroyed in the earthquake. Ron’s caste is Tamang and these are people of Tibetan origin that have settled in Nepal at various points in history. They are very gentle, welcoming people and their hospitality was apparent straight away. The village, made of 70% Tamang has been settled here for hundreds of years and they know nowhere else as home and have neither the funds nor desire to live anywhere else.

After refreshing myself by drinking from the stream outside Ron’s house we sat around the fire while his mother cooked us a chicken curry and plied us with home made whisky. We were all tired so I bedded down with the two lads in traditional fashion, all of us sharing a bed outside on the terrace. The next morning we watched the sunrise over the foothills. Shirkhabesi and its surrounds really is beautiful. 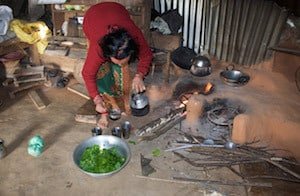 We were invited into the home of Nil Kumari, listening to her tales of mountain living over cups of sweet black tea and warm milk, fresh from her buffalo. Nil explained to us that nine of her close friends from the village died and her family home, which was just 2 years old was completely destroyed. The many years of saving for the house and a lifetime of memories went down with it. Nil’s house will cost $5000 USD to rebuild, but the much needed and promised funds from the government have never arrived. 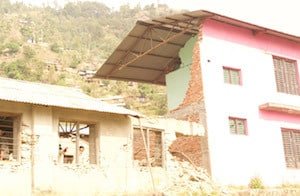 Nil is no stranger to helping other people and spends her time volunteering in the village health post. The community spirit here is amazing though and everybody is mucking in as best they can. The villagers helped build Nil a temporary house and they are keen to work hard and get the village back right.

What they do lack though is money for much needed materials. For the majority of Nepali’s, $5000 is a lot of money and would take most people in the village several years to save.

For the past seven months the 40 primary students at Shree Krishna Primary School have been studying in temporary corrugated iron shelters. 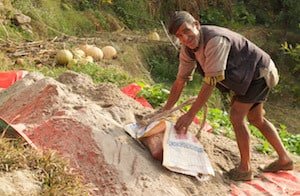 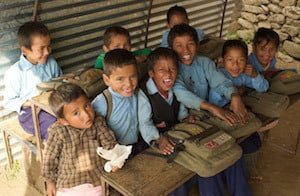 Making our way into the temporary shelters where the children were learning, I got the opportunity to speak with some young students of Class 3. Dinas Nepali, aged nine told me how scared he was when the earthquake happened. Dinas ran home as quickly as he could, only to find that his home had crumbled and fallen down. Now Dinas is living in temporary accommodation with his family. 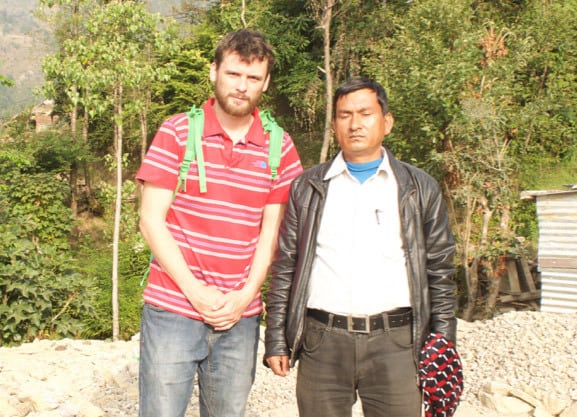 Puskar has an unenviable task. I find it difficult to grasp the difficulties he’s facing, teaching in three tin sheds, without electricity or supplies.

I continued to walk through the village, visiting the outlying houses and other schools in the area. I can’t imagine the hardship this community is going through. So many stories similar to Nil and Dinas’.

In this region, seven schools have been irreparably damaged and many students are still being taught amongst the rubble, in dilapidated buildings and precarious conditions. 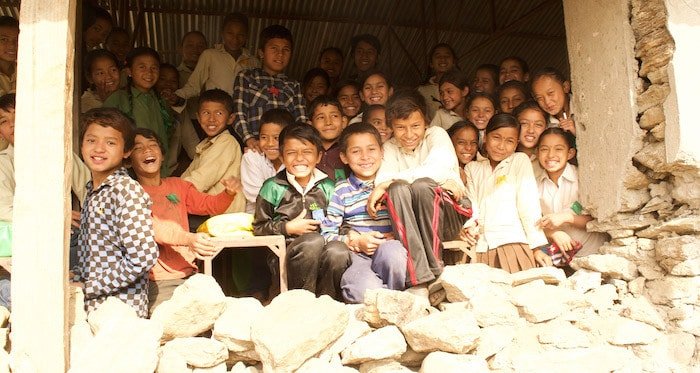 After two days in Shirkhabesi, it was time to let the construction of the new school continue. Supplies are being locally sourced and we are also using local labourers, contractors and engineers as a way to ensure our project has maximum benefit to this community. Rajan, Ron and I got back on our bikes and made the long 75km journey back to Kathmandu. 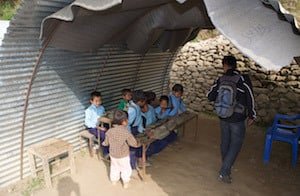 The story of Ron, a young man from this remote village successfully making it as a professional athlete is unusual. For most boys and girls the chance to succeed in life will be through learning and going to school.

Education gives stability, hope for the future and an opportunity for a better life. Let’s help make this happen! 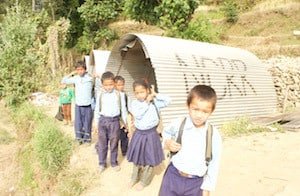 Lost Earth Adventures’ Share the Load Foundation has so far raised £5000, of our £8000 target. Please consider donating towards the purchase of desks, school uniforms and equipment by clicking on the Donate Now button below.

Many thanks to those of you that have donated already and to British climbing legend Johnny Dawes who gave up his time to host our fundraiser last summer.

Stay tuned for video of our work to come in the New Year and on-going progress reports of the school and the community of Shirkhabesi. 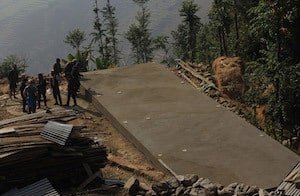 We have raised the £8000 needed and work is well underway. The Shree Krishna Primary School now has its foundation! Thank you so much to all of you that have helped so far. We are now raising money for classroom equipment and school uniforms. If you’d like to help support this remote little school then please click the donate button below. Thank you. 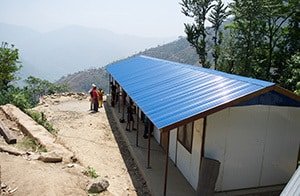 After 10 months of fundraising and building, the Shree Krishna Primary School was open for learning! Fitted with new facilities, supplies and school uniforms for the students. Follow our journey from start to end with our new video documenting the adventure.