Trekking to Everest Base Camp raises £43,000 for EY Foundation 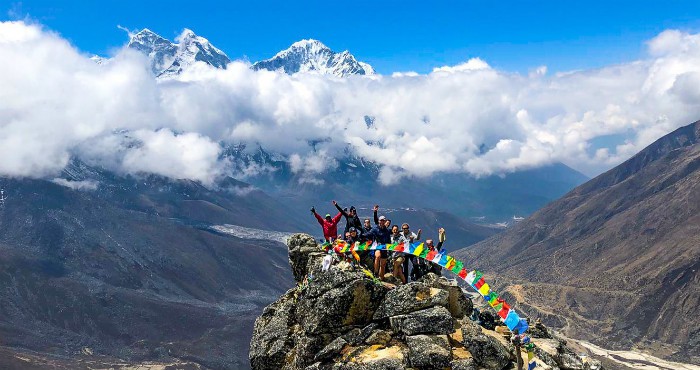 Our seasoned adventurer, Nev, gives us the inside track on leading the hike to Everest Base Camp with the EY Foundation, a charity which gives young people the skills and experiences to develop their careers while working with social enterprises to create more opportunities for young people in our communities.

He tells us what the trek entails, the high points, the challenges, and what it feels like to do something extraordinary to help an extraordinary cause. 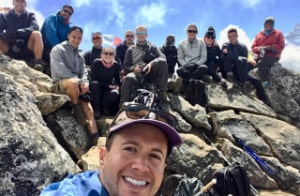 This is not so much due to some kind of ‘what happens on tour stays on tour’ code, but simply to cover everything that happens on one of these three-week trips would require a book, not a blog.

So, I’m going to stick to what the highlights were for me.

In case even that might be too wordy to distract you from your day, here’s the bottom line: the EY Foundation recruited Lost Earth Adventures to arrange and run a trip to Everest Base Camp (and back!). In the process, they raised over £43,000. I was lucky enough to be a part of it. 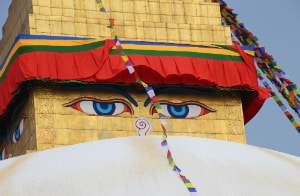 Where to start? Kathmandu, of course!

While once as far off the beaten track as Timbuktu, generations of mountaineers, hippies and fellow travellers have beaten a new track that leads right to the gates of our accommodation; Kathmandu Guest House.

Underwhelming though the name might be, it offers unparalleled service and a guest book of the climbing greats.

It’s directly beside Thamel, the best place to turn dollars into rupees and rupees into treasure… or tat.

While the bustle of Thamel never really slows, its commerce seems to undergo a series of reincarnations. It currently thrives on Chinese-made imitations of top-of-the-range trekking goods. This is particularly useful if you still need kit in-country or for when you return home.

Of course, there’s no end to ethnic clobber, trinkets and statuary. My particular weakness is for the bookshops. You can find the usual international bestsellers, but keep digging and you could unearth an obscure, dog-eared tome left behind by the original hippies generations ago. 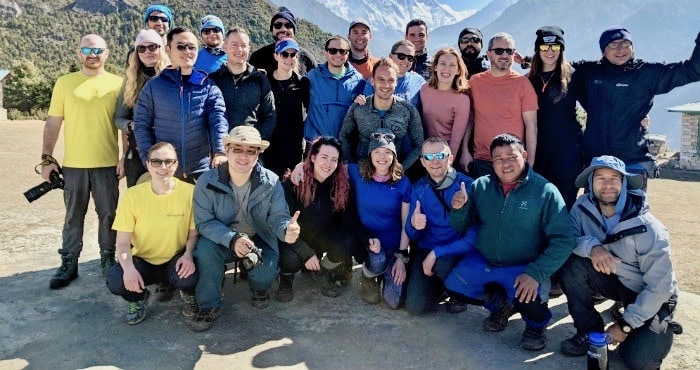 Even Forrest Gump would agree that Nepal is like a box of chocolates. You never know what you’re gonna get.

We thought we’d have to jump-start our trek with a flight into Lukla (more about the return flight later!), but the vagaries of Nepali officialdom meant that part of the itinerary had to be rewritten shortly before our arrival.

This is when having the support of a truly experienced company like Lost Earth Adventures makes all the difference. Things don’t always go to plan but what followed was like a whole second layer of chocolates to tuck in to.

The day-and-a-half road transport reveals the scale and complexity of this great country, showing us parts of Nepal not usually seen by Westerners.

More importantly, it means we start our trek not with the throngs at the ‘front door’ at Lukla, but more discreetly via the ‘service entrance’ at Kharikhola.

From here on in the only engines are on aircraft, the only sound of traffic the tinkling bells of mule trains.

These beasts lumber through a dozen at a time. Human porters carry impressive loads. We’re down to day-bags from here on.

The rest of our belongings are packed into holdalls and strapped in balanced pairs across muleback.

And so we walk on. Slowly but surely, we meander into another world.

The immediate relief is that after days of hectic and international travel, the real journey begins. Thousands of miles have been covered while essentially idle. Now we’re on the move, unrestrained. 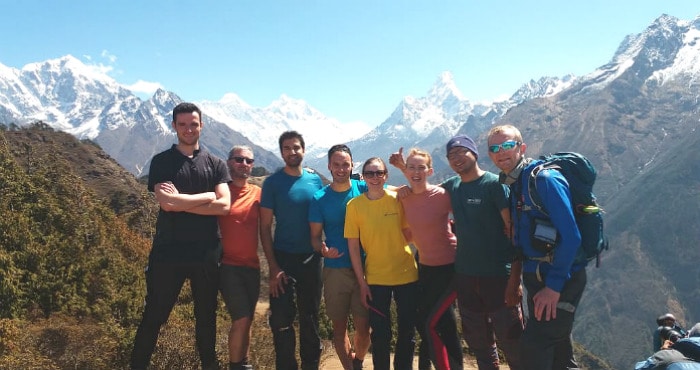 We take off the burden of technology and shallow priorities. Instead, we have a simple and honest mantra: look after your wellbeing, look after each step.

Of course, not even the Himalayas have avoided 21st century tech entirely. There are plenty of places where you can get a mobile signal. There’s decent coffee, WiFi and a couple of Irish Bars on this route. Western toilets are now the rule, not the exception. Yet there’s still a choice on offer that allows you to switch your phone off and immerse yourself in one of the most iconic journeys on the planet.

The town of Namche Bazaar 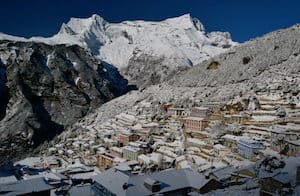 We run into other trekkers on the second day who’ve just flown into Lukla.

By this time, we consider them amateurish interlopers, mere mortals. Another day brings us to Namche Bazaar.

This place might be the most attractive town in Asia.

Set in an amphitheatre that looks out on stupendous views, its serried ranks of granite buildings are layered back on each side of the slope, giving you the impression of being able to see everything that is going on without even turning your head.

The town is the meeting place of different trading routes and when the bazaar itself is in session, sixteenth-century-looking traders appear. Their pack animals, indeed all the pack animals above here, are ‘dzo’. Aside from being a very useful Scrabble word, that’s the term for a yak/cattle hybrid that is uniquely suited to the altitude and lack of fodder. Wild enough to survive but tame enough to carry a load, these are impressive beasts.

We, however, are not as uniquely suited to the altitude. A two-night stay at Namche with the option of a day hike offers an acclimatisation boost and a first view of the highest peaks including Everest herself. 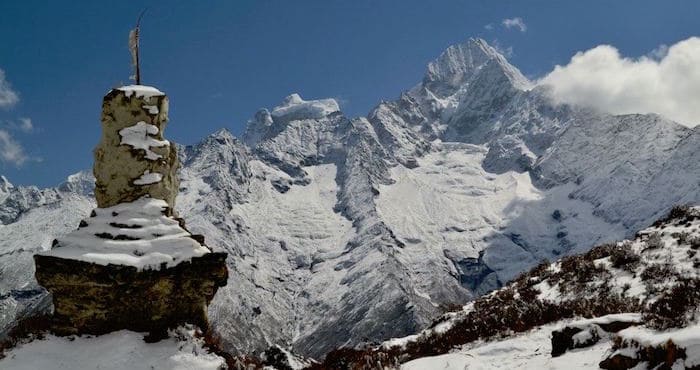 Safe acclimatisation is the cornerstone of our uphill journey over the following six days.

Though the air thins, the evenings provide recovery time and another rest day certainly bolsters our spirits.

As we ascend, the landscape dries and thins too. Sometimes, even turning a corner presents a completely different colour scheme. Kathmandu required air conditioning, but after a week it’s like we’re walking through an Arctic tundra, mesmerised by the tallest mountains on the planet.

In amongst these days is probably the sweet spot of this trip. It’s when you become used to the routine and the trekking but the destination is not quite a reality yet. You become easily convinced by the cycle of your day: deep sleep, bracing exercise, chai and dahl baht.

But, increasingly, the destination did loom ever larger in front of us.

Gearing up for summit day 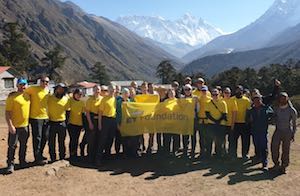 Another of Lost Earth Adventure’s cunning ploys is to have your last night’s sleep at Lobuche. It means you have one hell of a challenging day ahead—up to Everest Base Camp and/or Kala Patthar and back down to Lobuche—but it makes total sense.

Restful sleep higher up is unlikely. And at this stage, our group is more than fit enough for the challenge.

Summit day starts long before dawn. The group divides up according to destination and guide. While Everest Base Camp is on offer (everyone has heard of it, but you don’t get the greatest views), Kala Patthar is a huge temptation. It’s a deserted and beautifully-isolated summit but without the same bragging rights. The EY team choose whether to attempt one, the other or both.

Make no mistake, summit day is an attempt. There’s an almost random element to which even the most-acclimatised can be hampered by altitude sickness. As you continue in the pre-dawn chill, you ask yourself; are you drinking enough? Eating enough? Do you have the right amount of clothes on? These are small decisions, but each one is made to minimise the body’s inevitable stress. 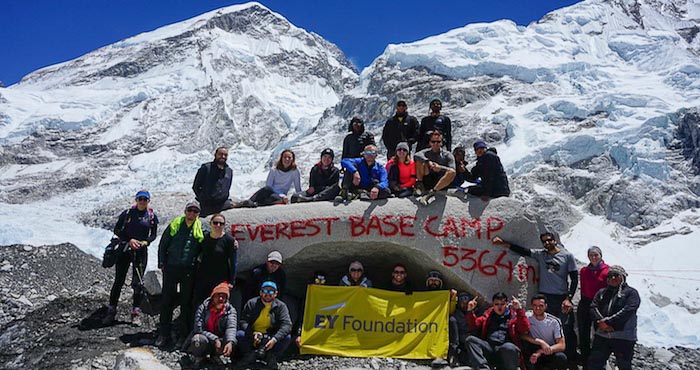 Just as inevitable, the sun rises and the landscape regains some colour. Each step from here is a crucial step towards your own spiritual and physical highpoint. Made it!

The way down to Lukla

It’s funny how thoroughly you can lose faith in such a thing as physics while strapped into a twin-engine aircraft at the top of an airstrip that falls away in front of you so severely that most of it is lost from sight.

The pilot’s got the handbrake on while he brings the engines screaming up to full revs. At some point, the chocs come away and we are pulled forwards off the flat and onto this ridiculously-angled runway.

We barrel down it. It feels like a funfair ride. It seems to use every foot of the tarmac until eventually, the mountain falls away below us and suddenly we are not falling but flying.

It’s the beginning of our journey home. We’ve created new memories, visions of mountains that we can never unsee, and we’ve helped a truly great charity in the EY Foundation. The group raised more than £43,000. I’m not sure what feels better; reaching the summit or helping a great cause do the same. I’ll go with the latter.

Like no other trek, this is one that ended on a high.

Read more about how the EY Foundation helps connect young people with the employers they want to work for.

Do you run a charity?

Take a look at our charity challenges. Do something different and get involved!

Neville Shortt is an experienced trekker at Lost Earth Adventures and specialises in leading hikes in Nepal.