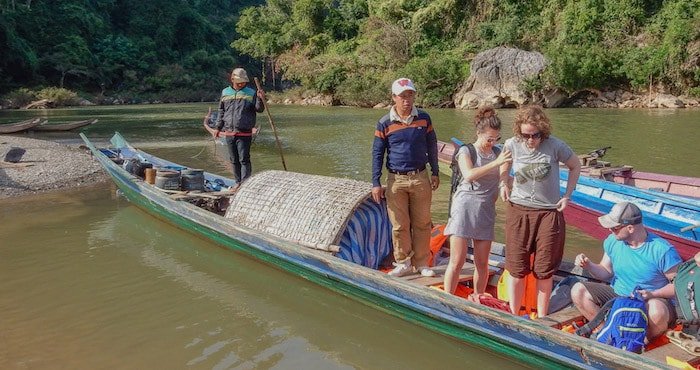 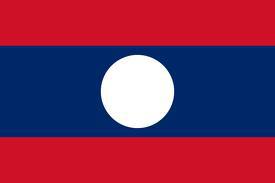 With its undisturbed cultures and undiscovered environment, the country has captured the hearts of many. Coupled with possibly the most chilled out people on earth means that Laos is fast becoming a must go for off the beaten path travel and the adventure tourist! The beautiful simplicity of the village life makes a refreshing change to the fast paced atmosphere found elsewhere in Asia, and the warm welcome received by the somewhat reserved and shy Laotians help make a visit to Laos a truly unforgettable and welcome experience.

The culture, pace and attitude of Laos have remained relatively unchanged for the last century, making it a fantastic step back in time, away from life as we have come to know it. For a real break, away from the hustle and bustle and crowds, this country of mountains and rivers is the perfect place to go. 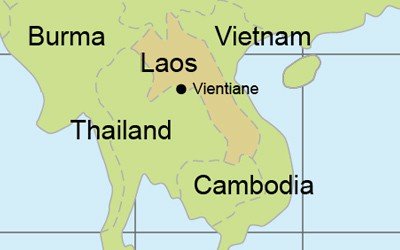 There is so much to see in this beautiful country. From the adventure haven of Vang Vieng to the UNESCO World Heritage city of Luang Prabang with its robed monks and monasteries (often referred to as a destination on its own!), and from the mountains of the north to the impressive ‘Mother of all rivers’ the Mekong; Laos really is an untouched beauty. It is a country where you really can discover somewhere that no one has been before and can genuinely discover the explorer within.

The exotic wilderness that is Laos and the amazing scenery draws travellers who are looking for an experience and a bit of intrepid travel. There is the opportunity to sit back and marvel at the scenery and culture or to embark on the more adventurous activities that Laos has to offer with options including kayaking, rafting, boating, caving, trekking, and tubing. Unsurprisingly, due to the spectacular limestone crags and karst cliffs rock climbing is available and is considered to be some of the best in South East Asia! Laos is also considered by many to be a perfect place for cycling, as the roads are quiet and peaceful as there are few cars. Imagine all of this with the amazingly dramatic, yet peaceful and serene backdrop and there is no wonder that Laos is a favourite for all who have been there, providing the opportunity for an alternative and exciting adventure holiday.

Our Trips to Laos

The climate in Laos is best described as tropical, with a seasonal monsoon meaning that the weather is hot and humid with plenty of rain in the wet season. The average temperature is around 29 degrees C although this can drop in the cooler months to about 15 – 20 degrees C. The days are usually warm and sunny most of the year. There are two basic seasons, the rainy season which runs from May to October which is characterized by downpours lasting a few hours every few days or so, in this season, the humidity is much higher, but after a downpour the country is greeted by fresher cleaner air, beautiful clear blue skies and rainbows after the afternoon rain. The dry season runs from November to April or early may, and is subdivided into 2 distinct sections, November to February is the cool dry season and March to April is the hot dry season. We visit during the ‘dry’ season, and will not experience much rainfall during our trips.

The official currency in Laos is the Lao kip but more commonly you will find that three currencies are used: the Kip, Thai Baht and US dollars. In the smaller towns and villages the kip is usually preferred however for more expensive goods and services prices tend to be quoted in baht or dollars. Laos is one of the poorest and potentially least developed countries in the world and as a result is often considered one of the cheapest to visit. Whilst prices have increased over the last few years, Laos is still undoubtedly the cheapest Asian country to visit. ATMs can be found in Luang Prabang, Luang Nam Tha, Vang Vieng and Vientiane. The kip is not convertible to any currency outside Laos; therefore the only reliable sources of foreign exchange information are those inside the country.

Laos has a reputation amongst travellers of being one of the safest and hassle free Southeast Asian countries to visit, and is a remarkably safe place to travel. There is little crime reported and much fewer of the tourist scams which are commonplace in other surrounding countries. Urban Laos is generally considered safe, although it is advisable to exercise the same caution and vigilance as you would in any urban environment. The country’s gentle nature is reflected in the comparatively low chance of being robbed, mugged, harassed or assaulted and the prevalence of these crimes is much lower than in most Western countries. 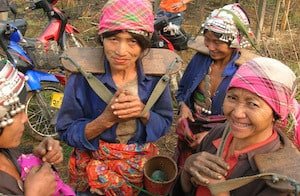 The people and culture of Laos is often described as one of the most fascinating parts of travelling through Laos. Laos people are considered to be open, honest and friendly possessing a strong sense of respect and courteousness, as well as being warm, welcoming, shy and seriously laid back in comparison to other Asian Countries. Laos is one of the least densely populated destinations in Asia and is home to 68 different ethnic groups based on language, culture and traditions. Over 85% of the population live in the countryside.

The people of Laos great each other and say goodbye using the Nop, it is also used as an expression of respect and of thanks. It is performed by placing one palm together in a position of praying at chest level, but not touching the body. The higher the hands are, the greater the sign of respect to the recipient.  When entering a Wat (temple) or private home it is customary to remove one’s shoes and in homes that are raised off the ground, the shoes are usually left at the bottom of the stairs. Over 90% of the population are Buddhist. Lao is a tonal language and a member of the Tai Kadai (Kadai) language group.

Laos operates a one party communist system and there is no legal opposition. It is generally accepted that the Lao People’s Revolutionary Party (LPRP) is loosely split between an older more conservative guard and younger members pushing for limited reform. The president of the LPRP was elected for a five year term in June 2006 and the prime minister was appointed, also for a 5 year term in December 2010. The political situation in Laos is considered to be fairly stable.

Rivers and mountains are the main things that come to mind when describing the scenery in Laos; cutting through the country with their dramatic ridges and valleys, rivers and mountain passes. Mountains and plateaus of rolling hills and cultivated fields are said to cover well over 70% of the country with the Annamite Chain running half the length of Laos parallel to the mighty Mekong River. The limestone gorges and valleys rise hundreds of metres above sea level, providing a brilliant white outline falling into the tropical jungle of the valleys below. The remainder and that which isn’t covered by breath taking, dominating mountains, rivers and plateaus is covered by lush forest, fertilised by heavy downpours in the wet seasons and maintained by the Mekong river, the floodplain of which forms some of the most tropical and flattest areas in Laos.  The force of the Mekong forms intimidating rapids and waterfalls throughout the country as well as gentle ones more fitting with the relaxed nature of Laos.

The mountains, forests and rivers are home to a range of wildlife, some endemic to Laos and others shared with its Southeast Asian neighbours forming some of the least disturbed ecosystems in the world. The higher forest cover and fewer hunters in Laos mean that often the numbers of wildlife are greater here than with any of Laos neighbours. The ancient kingdom of Laos was known as the ‘Kingdom of a Million Elephants’ and whilst there are only about 2000 elephants left in Laos, this population is still one of the largest in the region. Other mammals to be found in Laos are the lesser panda, raccoon dog, pygmy slow Loris, various species of goat and antelope and a variety of cat species including the leopard cat and Asian golden cat.  However, one of the most notable of Laos’ wildlife are the primates! The lush forests and mountains also have a rich selection of resident and migrating birds, although for many reasons, there prominence in the habited areas is much lower. Unfortunately there are dozens of species in Laos, which are now endangered, although initiatives such as those created by NGOs and the World Bank are making progress. 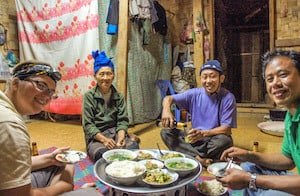 Whilst the food in Laos shares many characteristics with its neighbours, the food here is very distinct. Laos food is often considered an experience on its own, one definitely worth having! Traditional Laos food is simple and straight forward, with Sticky Rice being the foundation of many Laos meals. The freshness of the ingredients is very important to Lao People who rarely use pre-prepared ingredients.

Every region has its own specialities. Lao food is traditionally fiery and fragrant with a touch of sour. Its distinctive taste is owed to fermented fish sauces, lemon grass, coriander leaves, chillies and limejuice. If we were to pick a national dish for nomination it would either be Laap, a salad made of minced meat or fish mixed with garlic, chillies, shallots, aubergine, galangal and fish sauce which can either be eaten raw or cooked, or tam som which is a spicy salad made of shredded green papaya, garlic, chillies, lime juice, fish paste and sometimes dried shrimp or crab. Each cook has his or her own particular recipe, but each dish will invariably be served with sticky rice.

Laos cuisine also has a culinary influences from France, owing to the country’s former colonization of Laos. It is fairly easy to find traditional French cuisine in the larger cities, though less oft in the countryside and villages. Despite this, Laotians have mastered the art of bread and baguette making, and you can find fresh breads and baked goods most anywhere!

It is one of the least populated countries in South East Asia with more Laotians living outside of Laos than actually reside in the country itself.

The Plain of Jars in Laos is home to nearly a thousand huge stone jars, the largest of which weighs over six tons! And the smallest is still big enough to hold a person. The jars are thought to be about 2000 years old, although their purpose and makers remain a mystery. It is more commonly believed that they were uses in burial rituals.

On the border of Laos and Cambodia you will find the Khone waterfall, the volume of water over this waterfall is greater than any other waterfall in the world. About 410 000 cubic feet of water falls over its 45 foot drop every second, in comparison the more famous Niagra Falls has a volume of about half of this!

Lost Earth Adventures offer the opportunity for a real adventure holiday in Laos, exploring this dream travel destination in an eco-friendly and responsibly manner.