A Journey into the Heart of Southeast Asia

A Tale of Pure Adventure in Southeast Asia

As I sit here in Bangkok reflecting on the last 23 days on our Southeast Asian Odyssey tour, I’m wondering how I’ll fully be able to share and encapsulate the journey we’ve been on and the unforgettable experiences we’ve had.

Our adventure began in Bangkok.

A city that never sleeps is a contrast of old and new. Skyscrapers rising up to the sky stand next to spirit houses and ancient temples in equal measure. Bangkok is a fast city, but there are moments of calm to be found. 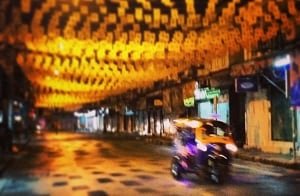 Our first night and day we stayed in Banglamphu, the “old town” and in my opinion the heart of the city. Early to rise, avoiding the sweltering midday heat, we take a tuk tuk (a 3-wheeled taxi of sorts) to Wat Phra Kaew and the Grand Palace. 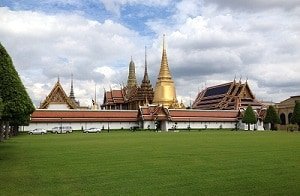 This is the Temple of the Emerald Buddha and the holiest site in Thailand. One of our local city guides is trigger happy with camera lens and insisted on photographing every square inch of the place – at least it’s well documented!

Our next stop was the UNESCO World Heritage listed city, Ayutthaya. 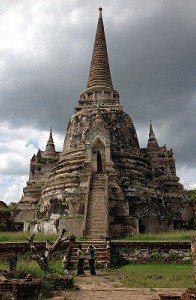 It was once the ancient capital of Siam (Thailand) and the city is dotted with dozens of ruins amongst a functioning modern city. With its UNESCO status, the ruins are well preserved giving you an idea of how grand it once was in its illustrious past.

In the evening we hit the Bang-Ain food market, more of a local affair this is a great place to experience traditional Thai food in its greatest form – Street Food!!! It’s also home to one of the greatest fresh fruit juice ladies this side of the Mekong!

On the Night Train to Chiang Mai 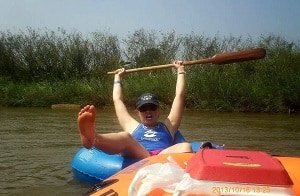 Taking an overnight train we slumbered our way 400 miles north to Chiang Mai. With a free day, we headed into the hills and rice paddies, spending the day in sunshine lazily tubing our way down the Nam Ping. That evening we chilled out on Chiang Mai’s only white sandy beach, playing badminton (badly) and attempting to conquer a slack line. 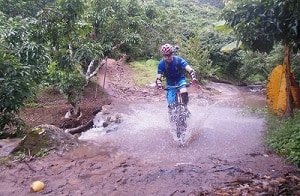 The next few days were spent rock climbing and abseiling at the huge cliffs of Crazy Horse Buttress, going to a Muay Thai match, perfecting culinary skills in a cooking class and getting the adrenaline pumping on single track and muddy trails in the cool mountains of Doi Suthep National Park. Rain or shine, this is a city not to be missed!

After a fun filled week in Thailand we were set to embark on the next part of our adventure – to the Land of a Million Elephants!

The Land of a Million Elephants – Laos! 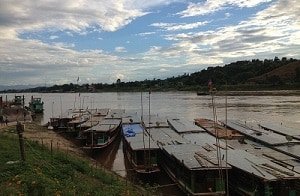 We crossed into Laos by small ferry with ease and much to our surprise there was a festival! It was the end of Buddhist Lent and the entire town (and its many surrounding villages) were out to celebrate. We met up with another of our local guides, Somdy and spent the evening dancing with army generals and high up officials (we found out later) and hopping from one house to another. 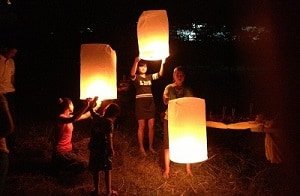 Everyone seemed ready to welcome us with big grins and Beer Laos at the ready! The culmination of the evening was offering our Ka Thongs – a floating offering made of marigold flowers, incense sticks, and banana leafs down the Mekong – and setting alight our lanterns in the sky, wishing for good luck and good fortune.

A Journey Up the Nam Tha 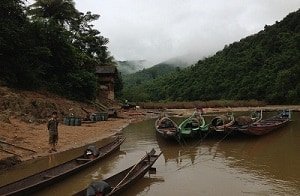 The next morning we met our local boatman for a 2 day, awe-inspiring journey down the Mekong, and veering left up the Nam Tha. It is hard to put into words what it’s like to sit back and watch as river life passes you by. Here there are no roads, the river is your highway. 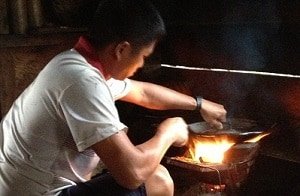 Families bathe on the banks, water buffalo laze in the water, Kingfisher dart from branch to branch, children and their fathers fish on their long tail boats and it’s as if time is at a standstill. It’s a different way of life that I think must be experienced to appreciate in its fullest. The evening was spent at our boatman’s house and we ate communally with his family, with heaps of sticky rice and locally prepared food.

The road to Luang Nam Tha from Nale, the end of our river journey is rough and not sealed throughout, but still it’s a great opportunity to share the journey with locals on a songthaew (a converted passenger carrying truck). 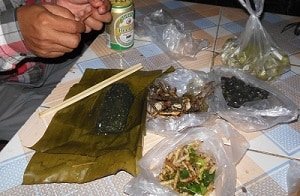 That night we visited the local market which has EVERYTHING on offer, whole pigs on the spit, fresh fish from the Nam Tha and even the things you may never have thought of are on the menu… fresh squirrel anyone? 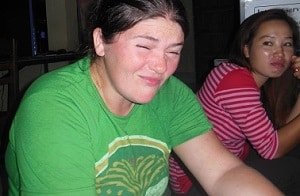 Giving in to the culinary delights on offer we tucked into frogs, snails, bamboo grubs, river weed and pigs cheeks – despite what it sounds like, this stuff was seriously delicious. The evening ended up dancing to fat beats in a karaoke bar surrounded by our new found fans… 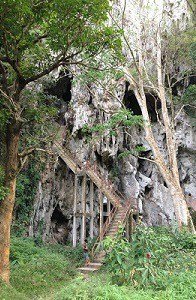 Nong Khiaw is a sleepy town nestled on the banks of the Nam Ou. The setting is stunning and dramatic, with thick jungle encroaching on the cliffs of massive limestone peaks. We took to bicycles and explored a cave a few miles from the town.

Here, during the Second Indochine War (Vietnam War) the entire village of about 700 people hid and lived in it. They cooked during the night to avoid detection and even had areas sectioned off for school, government and administration. Sadly this was the case for many Laotians during the “Secret War.” What many people may not know is that during this period Laos was the most heavily bombed place in the world per capita, as Americans dropped their bombs during flying missions. Remnants of this can still be seen today, and often you’ll see creative uses for bomb casings (like flower beds, fence posts and art pieces). 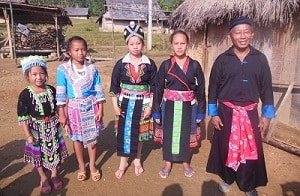 The next 3 days were spent trekking in the region.We took a boat an hour and a half upstream to the picturesque village, Mueang Ngoi before hitting the road to a tiny Hmong village – but not before we tucked into some tasty snake soup!!! The Hmong practise Animism, believing in spirits of the forest, river, nature, the home and ancestors. We stayed with the village chief and his house is built in the Hmong tradition. 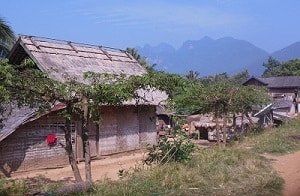 As we carried on, we were led by a Hmong hunter, who carried a machete and prepared for us a salt and water concoction in a hollow bamboo reed to ward off the leeches – it works! The trail led us through forest over log bridges and eventually to the Nam Ou, where our hunter friend bid us adieu. 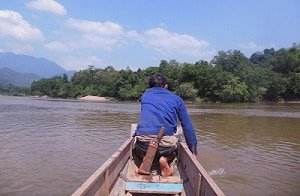 We sat here, eating our lunch of chicken and herbs with sticky rice while waiting for our chariot across the river. We had prepared the chicken in the morning, stuffing the chicken and herbs into a section of hollow bamboo tree and cooking it over an open fire. On the other side of the river, we made our way to a Khmu village, dropped our bags and carried on for about an hour to a beautiful, secluded waterfall. After 2 days walking in the heat it was a great place to refresh ourselves (and bathe in privacy).

On the way back to the village, Somday spent most of the time hacking a piece of this and chopping a bit of that and before we knew it, he’d collected all of things we would need for our dinner… Banana flower, check. Young bamboo shoots, check. Tarot root, check. Assortment of fresh herbs, check. We played an endless amount of football and other schoolyard games with the village kids before tucking into a fine feed. 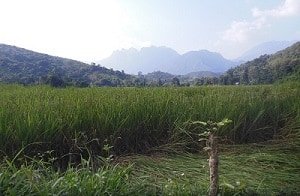 The villages here are remote, and though there is evidence of progress – there is now electricity in the villages – things don’t seem to have changed that much from when I first visited these villages many years ago. People still go to the rice fields and tend to the land, dry meat on their roofs, weave cotton by hand and have an overwhelming sense of community.

One thing though, is a few now have televisions and it’s amusing to see people transfixed to it, much as our parents did in the 50’s and 60’s. Alas, our trek was coming to an end, making our way back to Meaung Ngoi. 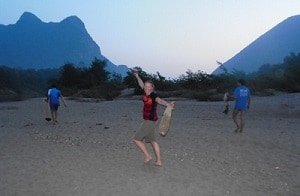 The great thing about travel is the unplanned surprises that happen on the road. When we got back to Meaung Ngoi we ended up in a raucous, competitive game of pretanque (a form of French boules) with the village men – bets of Beer Laos were put on the table and pride was on the line – we were divided into teams with the more experienced and though we threw a few good balls, I don’t think I’ll be giving up my day job. 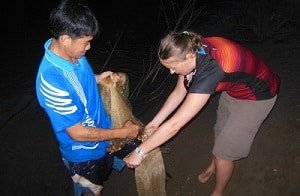 Afterwards we connected with local fishermen and at sunset set off to catch our supper. We ran along little island beaches getting into small pools chasing after our fisherman as we caught the sun’s last dying rays… and what a catch! Back to the village and a feast was upon us, the rest of the men from earlier came and joined us and it was an absolutely superb end to a surprising day. 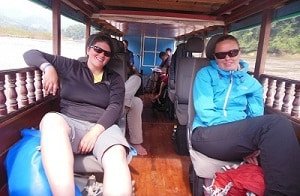 Another iconic river journey was to follow as we made our way to Luang Prabang, a UNESCO World Heritage Site and stunning town. We stopped by the holy Pak Ou Caves, which has over 2000 statues of Buddha and that evening hit the night market, treating ourselves to a traditional Khmu massage at less than £4 for an hour, it’s an absolute bargain. 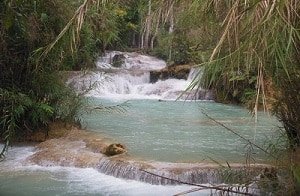 Just outside of Luang Prabang is Kuang Si Waterfalls – an impressive 7 tiered waterfall, turquoise in colour and flanked by lush green forested jungle. There is a rope swing to jump from and it’s a great way to relax in nature. In the evening we were invited into the home of Somdy, where he lives with his wife, parents and children.

We were humbled when they performed a Baci ceremony with a Shaman in our honour. This is an important ceremony offered to guests on long journeys, weddings and for special occasions. While offering food, water and prayers of good will, good fortune, long life and success the hosts tied strings and strings of cotton around our wrists to keep our spirits in place. 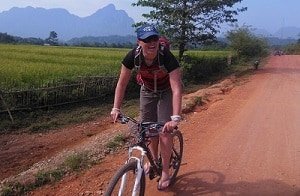 Last, but definitely not least we headed to the adventure capital of Laos, Vang Vieng. We spent an amazing 2 days, biking to blue lagoons, visiting some enormous caves, kayaking the rapids of the Nam Lik and just enjoying the scenery and reflecting on the last 3 weeks of adventures through South East Asia. 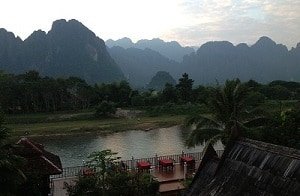 We took one last overnight train into Bangkok, shopped ‘til we dropped at the famous – for good reason – Chatchuchak Weekend Market and finally bid farewell to an unforgettable journey.