What Food and Drink Should I Take on a Yorkshire 3 Peaks Challenge? 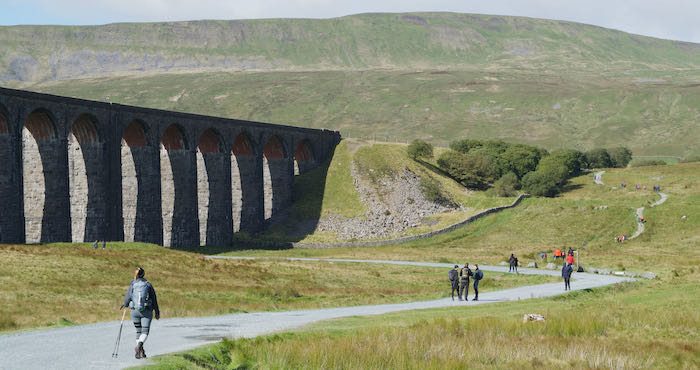 The Yorkshire Three Peaks (Y3P) walk is a wonderful challenge. I love the landscape that it moves through. I love how, looping back on itself, it has a sense of completeness. I love the way that it has Ribblehead Viaduct sitting there as a centrepiece. I love the fact that it has (spoiler alert) three peaks – Pen-y-Ghent, Whernside and Ingleborough. Fewer would not be enough and more would be too many.

For all that, it is challenge none the less. Earlier this year I overheard an unmatched description of the problem that it presents. While starting to ascend the last peak I overtook a young woman who clearly was not having the best of days. She complained to her companion “it’s bad enough that we have to climb three peaks, but we have to walk between them as well!”

There are plenty who struggle on the ascents and descents of this walk, but the main challenge is much more mundane. It’s the long hours of relatively flat walking in between.

For that reason, nutrition really matters. At about twice the length of most weekend walks, the body simply cannot sustain the pace on Y3P unless it is being properly fuelled. That being the case, this is some advice on what to do and what not to do, to fuel yourself for this walk.

The day before
Loading with carbohydrates has long been staple advice for endurance events. This usually translates as having a lot of pasta the evening before in order have plenty of reserves to burn off.

There is no harm in doing this, but in our case, there is no benefit either. Carbohydrate loading has the full weight of scientific research behind it, but its benefits only hold for those doing an event during which they will have little or no opportunity to eat. Like running an ultramarathon.

Feel free to have that big dinner if you like, but do not feel obliged to eat anything beyond your usual servings of carbohydrate and fat the day before the Y3P. 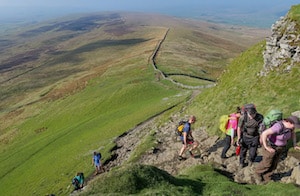 Breakfast
Before the walk many people are obliged to break from their usual routine both from getting up earlier and from not being at home. This frequently turns into missing breakfast which is a very, very bad idea. This really is the time to load up not just on carbohydrates, but also on the slow-burning fats that will get you through the day. A cereal bar in the car park simply is not going to cut it.

There is a general acceptance that a certain level of preparation is required through fitness training and having the right equipment. In exactly the same way, and for the same reasons, organise your life so that you can have a substantial breakfast before this walk.

If you usually have a coffee to get yourself into gear, organise that too. Your future self will thank you heartily for getting your caffeine level up to normal.

On the move
When it comes to pace, the key to this walk is to keep moving, only stopping for rests at Ribblehead and Philpin Farm. If you are one of the fitter members of your group you may find there are many occasions when you are waiting for the others to catch you up. If not, apart from taking a celebratory photograph on the first summit, but might not be taking your rucksack off until you are almost half way around the circuit.

You therefore need snacks and fruit that you can access while on the move, so bring plenty and keep them handy. More importantly; eat them! This is really what the downhills are for. The going will be easier, so take the opportunity to stock up so that your body can get to work on it before it really needs it. 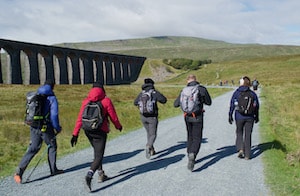 Bananas
Bananas deserve a chapter of their own on Y3P for the best and worst of reasons. They are highly recommended as a foodstuff especially for those who might otherwise just rely on different forms of sugar.

However, their popularity is such that some parts of this walk might be navigated in poor visibility through following the trail of banana skins. If Hansel and Gretel had the sense to use these instead of breadcrumbs they would have found their way out of the forest without any bother. But at least in the forest these things would rot. On moorland they sit there for years.

Bananas therefore remain highly recommended. But so is bringing a bag that you can put the resulting litter into.

Lunch
By the time you get to sit down and have a more fulsome rest you will have been on the go for hours. It is a great opportunity to treat yourself to some proper food. It does not matter if it is some kind of supermarket ready-meal. Just make sure that it is nutritious, pleasing to your pallet and sufficient to get you through the next few hours.

If, instead, you are still chowing down on snack food, there may well be problems in store. Sugar can only get you so far. Physically, it is very much a short-term strategy when you need to be playing a long-term game. Mentally, it gives you very little to enjoy and even less to look forward to.

You will probably only get two sit-down breaks in the course of this day; two ‘lunches’. It therefore pays to have two meals in your bag that you can really look forward to. 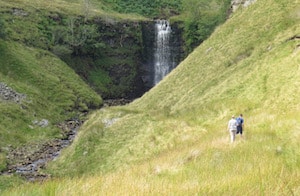 Water
Good hydration can be problematic on this walk, given that the amount of required water would be so heavy. The ready solution is simply not to carry it all.

Pick it up along the way instead. One option is from The Station Inn at Ribblehead or from Philpin Farm. They are both on your route.

What I prefer is to collect if from two streams that I have found reliable even in drought conditions. This water is delightfully cool. The streams are accessed close to the summits of Whernside and Ingleborough which also saves a lot of energy in carrying the stuff uphill.

Assuming the usual anticlockwise direction of travel, the ascent of Whernside begins by climbing away from the railway line and ascending Force Gill Ridge. The route then turns eastward and almost becomes level. The stream is the last to be crossed before the route again gets steeper and turns more to the south as it starts to make its way up onto the ridge that is Whernside proper.

This water will have come down Mill Stone Brow and across the upper part of Hagg Worm Haw Moss. So, its not quite in the ‘Evian’ marketing stakes and sounds more like a craft ale. But it does taste good.

The second suggested stream is much more obvious. After taking a break at Philpin Farm the route crosses the valley to get to Ingleborough. It ascends the massive amphitheatre known as ‘Humphrey Bottom’ (don’t ask), getting steeper as it goes.

Spoiler alert! Eventually it gets to the base of the mountain proper which is a short but very steep section that I think of as ‘The Wall’. All mountain slopes appear steeper when looking directly up them, and this is no exception.

The route ascends and zig-zags, and when it is almost onto the ridge this stream is directly alongside the path. In fact, when looking at that zig-zag path from a distance the vertical strip of green to its immediate left is the richer vegetation (nettles!) that is fed by this watercourse. 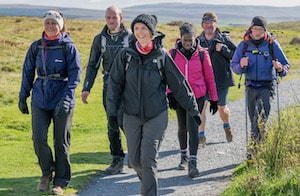 Once you have passed through the fence, you have missed it
Both these streams are reliable because of the large tracts of moor that drain into them. Their height above all settlement and agriculture attest to their cleanliness which can be guaranteed through your preferred water purification process (I would recommend a ‘Water to Go’ filter bottle for its lightness and lack of aftertaste).

It ain’t over until the surprisingly well-fed lady sings…
It may be called the ‘Yorkshire Three Peaks’, but getting to the top of Ingleborough is not the end. As the young woman said, you have got to walk between these things as well. The route back to Horton-in-Ribbledale usually takes under two hours. If you, or someone in your group, starts to struggle with an injury or even has an accident, that could take much longer.

For that reason is it well worth carrying a little more food than you think you will need. This is the time of the day when you will be most fatigued. Depending on the season, it may even be getting dark. The last thing that you need is to be getting ‘hangry’ at the same time. 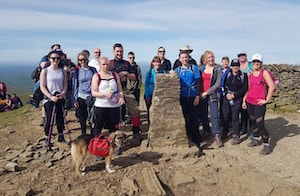 Putting it all together
If I was doing the Y3P tomorrow I’d plan to have a fried breakfast or at least a bowl of porridge. I would bring a cup of tea and a couple of bananas to the Horton carpark to have while waiting for the group. After all that I would have no problem getting up Pen-y-Ghent.

I would expect to get peckish on the long haul to Ribblehead, so I would have at least one cereal bar to hand to get that under control.

Taking a break at Ribblehead is the main opportunity for a little culinary indulgence, so I’d choose a pasta salad with some salami and a piece of fruit.

That would get me up Whernside calorie-wise, but I might be running the risk of not having drunk enough. So, for me, the nutritional focus on that hill is to take on water.

I would have a couple of more cereal bars to hand, but I am unlikely to eat them until descending Ingleborough. Instead, I’m looking forward to Philpin Farm and my second ‘lunch’; maybe red chilli houmous and more salami with a wrap followed by a banana.

Predictably, that gets me up Ingleborough and I have the cereal bars left over for the long walk out. However, I really don’t know how long I will be out for. This last stage is when people’s existing injuries can really kick in and reduce the most optimistic strider to a slow crawl. The last thing they need is me losing focus. And the last thing I need is them running out of energy. I am therefore likely to have two Soreen ‘Fruity 5’ malt loaves buried somewhere in my bag. For me, they are the dietary equivalent of having a roll of gaffer tape in your repair kit and with the added advantage of tasting good. 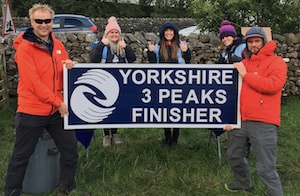 Conclusion
Happily, none of the suggested preparations require inordinate expense or exotic supplements. They involve the same foods that would constitute a normal balanced diet. The only difference might be in their quantity and portability. And if you think I am talking bananas again, you are probably right.

Do the Challenge Yourself

Nev leads the Yorkshire 3 Peaks dozens of times each year and hopefully these tips will be invaluable for your challenge. If you’d like to join us on an open challenge or have us organise an event for your group, see what we can do for you on our Yorkshire 3 Peaks Page.

If you get your nutrition right, you’ll fly round the route, here’s a video of Richard, another Lost Earth Adventures’ guide running the Yorkshire 3 Peaks on a stormy night.