A River Runs Through It

A Micro-Adventure Canoeing Down the River Ure 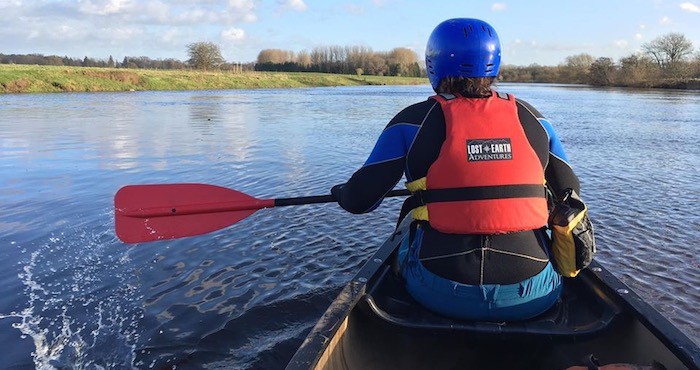 It was a cold day in January and the River Ure was in full spat. In the distance, wisps of white water trundled downwards. Rapids. I was sat in a Canadian canoe, and although I am in fact a full-fledged, maple syrup loving Canadian, I am most definitely not a canoer! I felt like a fish out of water, as I scoped out this small section of rapids.

Up until this point, it had been a thoroughly relaxing affair. My husband, Richard and I were having a lazy morning, drinking coffee with no real plans in place. But, we opened the blinds and the sky was a bright blue. It would be criminal to stay indoors on a day like that. So, we hatched a plan to go on a micro-adventure; canoeing from Ripon to Boroughbridge. As a climber and hiker primarily, I’m more akin to solid ground, so this was an exciting prospect.

Canoeing From Ripon to Boroughbridge

The journey would take us on a beautiful 13-km stretch of river. It’s an area abundant with wildlife, including kingfishers and otters. The trip can be done in around 5-hours, and for the most part, meanders its way quietly through the beautiful Yorkshire countryside. 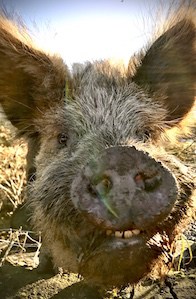 We arrived at the put-in point, which is in a field managed by the BCU (British Canoe Union) and was swiftly greeted by Mr. Snuffles, a very hairy and inquisitive pig, with a big toothy grin! After a few pets and ear scratches, we made our way to the river. It may have been sunny, but it was still winter so we donned wetsuits and neoprene gloves and booties.

The first proper gander at the river and it looked swift; intimidating to my novice eyes. But, Richard is an adventurous paddler, having kayaked wild Himalayan and icy Canadian rivers in the past. With him at the helm, I felt confident we could go for it!

It seems counter-intuitive, but when you enter into flowing water, you situate your boat facing up the river, in an eddy, which is a circular current separate from the main flow of the river. You paddle up the river, lean into the main flow, paddle hard and the current turns you around so that you’re now facing downstream. So, that’s what we did, and away we were.

From the banks, the river looked swift, but once we were actually in it, and paddling, it was pretty chilled out. What a fantastic means to while away an afternoon! But, wait! There was that chute in the distance, and the closer we got the faster the river went and in my eyes that rapid looked HUGE! We tucked into an eddy and Richard went to scope out our options for the best line.

He came running up the bank and shouted, “it looks great, we’ll run it, grab your paddle and follow my lead, we’re taking the biggest line!” I weighed up my options and decided I was okay with falling in (this was my original fear, mainly due to the cold temperatures), I had a thick 5mm wetsuit, a buoyancy aid, and a helmet. The power of positive thinking seemed to work because as we approached I paddled hard and found myself absolutely loving it. The rapid was short-lived and when we were in the thick of it, it didn’t seem that big. We rocked it! 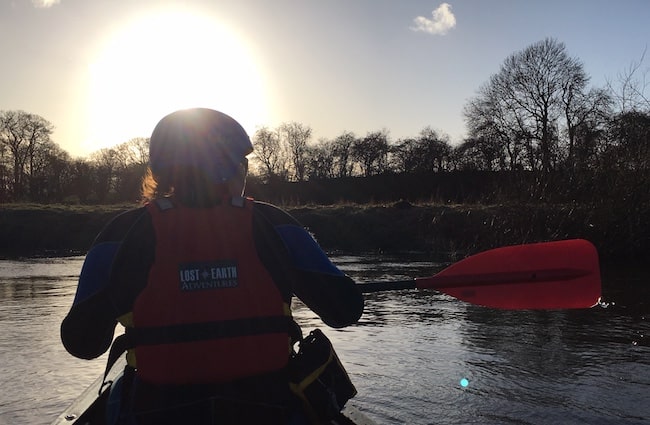 Regular paddlers may laugh, the rapid was no more than a Grade 1 (entry-level) and in the summer this section would be no more than a ripple. But, at that moment I truly felt alive.

But, at that moment I truly felt alive!

The rest of the trip was a gentle, relaxing saunter downstream, all the way to Boroughbridge. We passed the beautiful gardens of Newby Hall, bypassed a lock where the canal joins the river and just, took it all in. We ended the day with a celebratory pint at the Grantham Arms, raising our glasses to a very successful and rewarding micro-adventure!

The Ripon – Boroughbridge canoe trip is best done in the spring, summer, and autumn months, but can be done year-round. For the most part, this is a gentle river trip and can be undertaken by complete novices, perfect for a fun, adventurous day out. The rapid mentioned is only sizeable (maximum Grade 1 rapid) in the winter months and can easily be bypassed. There’s also the option to take the canal down for the first part of the trip and join the River Ure later on downstream.

We provide canoeing, kayaking, and stand-up paddleboarding trips across Yorkshire, the Peak District, the Lake District, and Norfolk. See where your paddles can take you or get in touch on 01904 500 094 or email us.