A Winter Ascent of Jebel Toubkal 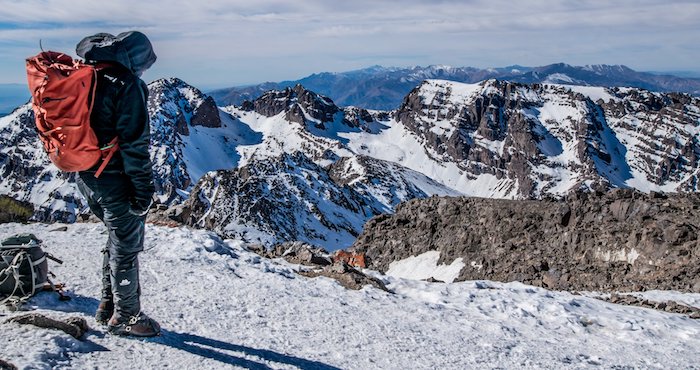 Company Founders, Richard and Sarah Goodey worked off their Christmas dinners on a winter trekking ascent of Mt Toubkal in Morocco. Sarah writes about their adventure below.

A decade ago I found myself trekking through the Saharan desert on the back of a grumpy camel named Dolores. Morocco was a dream of mine. I yearned to sleep underneath an endless sky, with thousands upon thousands of stars and one moon amongst the shadows of the dunes. I got my wish, staying with a semi-nomadic Berber family, the owners of Dolores the Camel. In the mornings when the sun started to rise, warming the sands, its rays dancing in the dunes, it was I felt, heaven on earth. 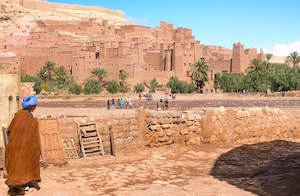 My concept of Morocco had always been just that; of desert, tagines, camels and dunes. It was certainly not of snow-capped peaks, challenging mountaineering routes, ice axes or crampons. Imagine my surprise and delight, when Richard suggested spending New Year’s Day climbing Jebel Toubkal (4167m), Morocco’s and indeed, North Africa’s highest summit in full winter conditions.

Marrakesh
Marrakesh. Many may consider this a love/hate type of city. All journeys into the High Atlas Mountains, home of Jebel Toubkal and a host of other 4000m+ high peaks start in Marrakesh. 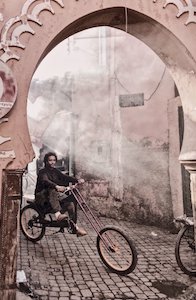 Maps are useless. You will get lost. More than once. Hawkers selling everything from henna to fortunes and succulent dates to aromatic, vibrant spices will vie for your attention. Tagine and Berber whisky (sweet Moroccan mint tea) reign supreme and in the city’s main square, Jemma el-Fnaa you’ll find over 50 stalls selling over 50 different varieties. Jemma el-Fnaa is where all the action is. Storytellers and musicians and acrobats and snake charmers and fortune tellers and locals and tourists collide into Africa’s largest square. Day or night it is a spectacle to behold. The ancient souqs branch off of the square. Tea pots, throw rugs, spices, paintings… you’ll find anything and everything you never knew you needed in here.

This city is electric and I err on the side of love. 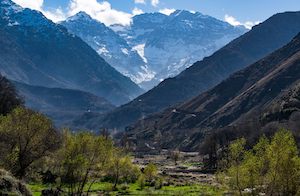 Heading for the Hills!
After a day getting lost through the souqs of Marrakesh, we made our way to Imlil, a small settlement situated 1800m above sea level and the gateway to the High Atlas Mountains a 90-minute drive away. The first order of business was to arrange for a mule to assist on our trek from Imlil up to our basecamp at Les Mouflons, one of two refuges at the base of Toubkal. Simple!

Sort of. Richard and I walked down to the local guide’s office and met Abdul, explaining our requirements to him.

“No guide?” queried Abdul. “No guide, no mule, no luck. Not possible to have just a mule.”

This carried on for quite some time, but with a bit of back and forth we thought we may have come to an agreement. We left the office and Abdul escorted us across the road towards another building. A brand new, shiny black SUV stopped next to us. The driver of the vehicle, sharply dressed and with a serious face got out, gesturing for us to continue.

We walked up the short flight of stairs as both gentlemen followed close behind. At the top of the staircase I looked through the open door. The police station was tiny.

An officer came towards me requesting my passport which I dutifully handed over, he disappeared back into the shadows. I could see him diligently taking down my details onto a large ledger.

“Salaam Alaikum, I am Mohammed, what is your name?” The man from the SUV looked intently at me. I replied, “Salaam, my name is Sarah.” Mohammed’s eyes softened and a big, jovial grin appeared, he held his hand to his heart and told me it was “beautiful, yours is the namesake of the wife of Abraham, the mother of Isaac, a most honourable name in Islam. We are so pleased to see you here. Welcome to my home.”

It turns out the stop in the police station was just a formality as we were trekking solo. Over 90% of those attempting Jebel Toubkal come on guided expeditions. As an independent party, the police were merely recording our arrival to the region and jotting down our itinerary. We had also signed documents stating that we were competent mountaineers.

Mohammed as I came to learn, was the extremely friendly and well-connected friend-of-a-friend. He had simply arrived at the police station to meet with us and arrange for a mule up to to the refuge. He also gave us his telephone number and said to contact him if any issues arose. He was a good man to know! After a lot of handshaking we were on our way.

A Horse (Mule) with No Name 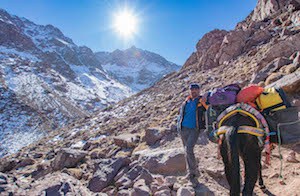 We met our muleteer, (another) Mohammed early the next morning after a chilly night’s sleep. Our mule was nameless so we christened him Morris, loaded him up and set off. The trek to the refuges is about 5-6 hours and has about 1400m of elevation gain. It’s a straightforward, thoroughly enjoyable journey, but the elevation is high enough to notice the thinning air. Staying overnight in Imlil and again at the refuge aids in acclimatisation.

The trail rises sharply out of Imlil, initially following the Mizane Valley. About half way up we stopped in the holy pilgrimage site of Sidi Chamarouch. A white-painted auspicious rock lies here and it is a good spot to stop for a fresh squeezed orange juice before continuing on. A short while later we reached the snowline and the end of the ‘road’ for Morris the Mule. We unpacked all of our gear and between myself, Richard and Mohammed made the final jaunt to the refuge; our home for the next few days.

Wow, what a beautiful setting! The refuges sit at the top of the valley and in the winter, are surrounded by snow-capped peaks and frozen waterfalls. Toubkal is not the only 4000m+ peak in the area. Ras Ouanoukrim and Timzguida are just at the head of the valley beyond the refuges.

We settled in for the night in the common area of the refuge in front of an open fire. Dinner was a hearty 3-course meal of soup, tagine and fresh oranges. Our initial plan had been to spend the following day doing valley walks and acclimatisation hikes before taking on our summit attempt of Toubkal later in the week, but excitement got the best of us and we opted to go for the summit, pre-dawn the next morning.

There are multiple routes to the top of Toubkal. The most popular and least technically demanding way to the top is via the South Col, approximately 95% of summit attempts are done via this route. The other option is the North Col, a definite step up from the south col, this is more committing and you should be very competent moving on steep ground and confident using ice axe and crampons. Upon our arrival to the huts, Richard had darted off for a pre-trip recce to the North Col, but given the altitude and my longish break from winter climbing, I didn’t feel the desire to head up via the north. So, South Col it was!

Our alarm went off at 3:45am. It must have been about -15 degrees Celsius in our room. I burrowed my head further into the covers, but Richard leapt out of bed like a spring chicken. The singular light of his head torch shone directly at me. It was time to get up.

After a breakfast of fresh Moroccan bread, juice and jam, we set off. The start of the route is fairly straightforward, climbing up directly from the refuges, before crossing a river and heading up a steep slope. Care is needed here. The terrain is fairly easy going but a fall would be consequential.

It was almost from the start of the journey that the altitude hit me. I walked quite slowly in the sub-zero temperatures, rests were frequent but brief due to the cold. Best to keep going, slow and steady. Although the altitude is not exceptionally high, AMS can be a reality from 2500m upwards. The best solution is to stay hydrated and pay attention to your body as you ascend higher. We offer advice on altitude.

The climb was definitely a challenge. We continued on as the sun begun to rise, alpenglow shining across the mountain tops. Eventually we reached the Tizi N Toubkal Pass (3950m), providing stunning views across the entire range. We sat here for a few moments, soaking it all in. Alpine starts are brutal, but totally worth it for moments like this.

The final push to the summit traces an awesome ridgeline with minimal scrambling, skirting a precipitous drop. Care with ice axe and crampons was definitely needed here. Slowly but surely the summit’s metal tripod came into view and Richard and I reached the top. I couldn’t believe it! We had the entire mountain to ourselves without a sole in sight. Panoramic views stretched across the Atlas Mountains and even further into the Saharan desert. Incredible!

We descended the way we came, making it back to the refuge for a well-deserved tagine and hot cups of sweet mint tea. 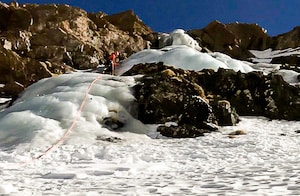 The next few days were spent going on valley walks and ice climbing on the region’s many waterfalls and icy outcrops. Although the temperature was chilly, there was an endless supply of blue skies and sunshine.

Climbing Toubkal showcased an entirely new side of Morocco that I had never considered before. The Atlas Mountains are beautiful, challenging and nothing short of awesome. How lucky were we to kick start our 2019 on top of North Africa’s highest mountain? Simply put, I can’t wait to go back!

If you’d like to climb North Africa’s highest mountain with us, then visit our Mount Toubkal page to start planning!

Minimising Our Impact
Water To Go gave us some of their filter bottles for our Toubkal Expedition. We care deeply about the environments that we travel in and want to preserve them so that we can share the same spirit of adventure with younger generations. We know just how significantly plastic pollution is affecting our planet and so we’re trying our hardest to reduce the amount of single use plastics we use. Our Water To Go bottles not only allow us to cut down on waste but also give us access to clean and safe drinking water, no matter where we go. From now on, we’ll be using our Water to Go filter bottles on all our expeditions. If you’d like to join us in having safe, convenient drinking water as well as cutting down your impact on the environments you’re travelling in, you can get your own Water To Go filter bottle and save 10% with Lost Earth Adventures.

If you’d like to climb North Africa’s highest mountain with us, then visit our Mount Toubkal page to start planning!